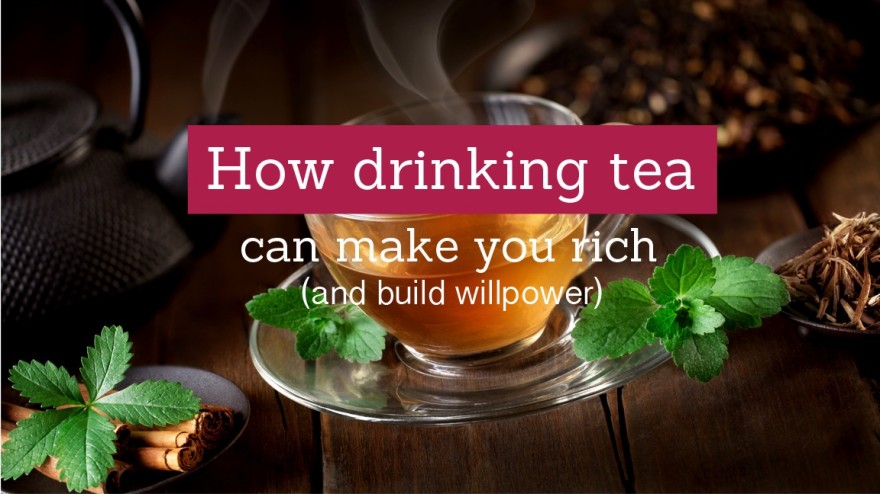 I stopped drinking coffee and it changed my life. It wasn’t so much that getting off the brew improved my health, although it didn’t hurt. The real win, when I switched from coffee to tea, was I learned about willpower.

In my early years in business I was a river guide. I had other jobs, but the summers were for guiding. Getting up early, packing mountains of heavy rafting equipment, driving to the river, rigging rafts, entertaining guests all day, often in cold, wet, nasty weather, and then doing it all again in reverse, made for a very, very long day. So we drank a lot of coffee. A lot.

I later graduated to nicer varieties and more visits to the growing number of cafes, where a coffee was now $3 or $4 a cup, instead of the $1 schlep I was weaned on.

One day, in my thirties, I made an appointment to meet a financial planner. I was looking forward to learning the latest in wealth-growing strategies. Instead, I was instructed to record every penny I spent for a week. His argument was I needed to know what I was spending before learning how to save. I’m naturally an over-achiever, so I do it two weeks.

At the time, I was teaching a lot of self-employment training classes and getting up early to prep for class and then drive to whatever town I was teaching in.

At the end of the two weeks I discovered (guess what?) coffee was a big expense on my list. And when I calculated my total annual spend on the bean in pre-tax dollars (what I needed to earn in order to pay for that mocha, or latte) I calculated I was working about one week a year for Starbucks!

I was in shock. Here I was busting my butt to land teaching contracts, sometimes teaching two classes a day, and I was blowing it on coffee! So I stopped.

On that day I went cold turkey and started drinking tea.

That was 17 years ago and I haven’t had a single espresso, latte, Frappuccino or mug of coffee since.

But, here’s the real lesson. It wasn’t so much about ending the coffee habit that changed my life, it was what happened to my willpower.

Willpower is our ability to make a decision rationally, even though our dopamine-induced prefrontal cortex is screaming out “Buy it. I need it NOW!”.

Willpower is what you use when:

WILLPOWER CAN RULE YOUR WORLD

If you want to drop 15 lbs, and be able to run stairs again, you need willpower.

If you want to finish that book, book more clients, close that deal, or get that raise, you need willpower.

And, if you want to earn more, spend less, or create passive income, you need willpower.

Willpower is hands-down the most powerful resource we have for overcoming resistance, procrastination, and the “Yeah, but’s” we throw at ourselves daily. [Tweet this out]

But willpower has to be created.

The concept that willpower is like a muscle is relatively new. Researchers discovered that experiments, like the classic marshmallow experiment with four-year olds, prove that when we practice willpower in one area of our life, we can gain more willpower in other areas.

In one experiment, subjects (all were selected because they were overweight) were asked to record everything they ate over a two-week period. They weren’t told to eat less, or change their diet – just record what they ate. After two weeks, not only did they eat less, eat better, and lose weight (which you might have expected) they also smoked less, drank less alcohol, and slept better. What?!?

CRAZY RESULTS FROM THE LAB

In another experiment, subjects, all of whom were involved in romantic relationships, were split into three groups. Group one were told to use their non-dominant hand for eating, opening doors, and brushing their teeth (all of which requires willpower.) Group two was instructed to avoid swearing and say “Yes” instead of “Yeah”. Group three, no change.

After only two weeks, groups one and two were measurably less likely to respond with anger in a disagreement, compared to group three, who wasn’t practicing any new areas of willpower.

Again, practicing willpower in one area (like using a non-dominant hand for routine tasks) strengthens it in others. You can also become more aware of habits that don’t serve you.

When I kicked the coffee habit I started to notice that post-it notes littering my desk, constantly checking email, or skipping breaks didn’t cut it. Nor did staying up late watching TV reruns, making excuses to avoid exercise, or procrastinating on writing my blog. It felt out of character to be sloppy in one area of my life, when I was keeping commitments in other.

I like the feeling of keeping a commitment and I wanted more of it.

It doesn’t take much to build more willpower, just choose one change, and do it every day. It could be going to bed earlier, eating less food, working from a Flight Plan, or checking Facebook less often. The point is to make the change and stick to it.

Just for fun, I’ve listed some (somewhat) easy changes you can make today. All of these are willpower-builders:

You are a super star. The fact that you read this blog tells me you care how you show up in the world and the results you create. Now you can polish your star to shine a bit brighter for the world.

Just pick one change from my list (or make up your own) and do it every day.

Let me know, below in the comments, which one you are working on – I want to know!