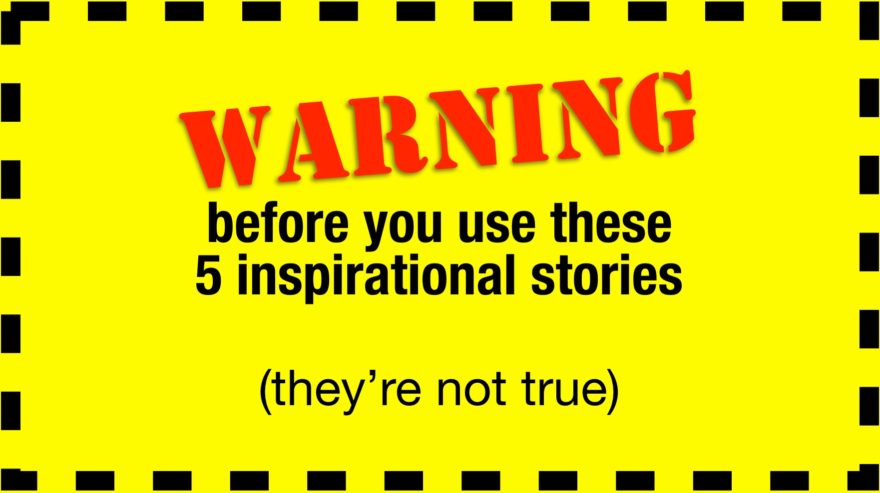 It’s sort of incredible how gullible we are for a good story. Not that there’s anything wrong, mind you, about falling for a good yarn.

In my early days as a speaker, I would hunt through leadership books hungry for morsels I could insert into my next speech.

Martin Luther King Jr. only added the famous “I have a dream” chorus to his speech at the last minute. Great! There’s an example of continual change.

Henry Ford famously said if he’d asked his original customers what they wanted it would have been a faster horse. Great! There’s a story about innovation and vision.

But, what about all the stories that got traction, were repeated thousands of times in books on stage and in training programs that simply aren’t true.

I did some digging and found these five – how many have you used?

The theory is that the flap of a butterfly’s wings in one part of the world (usually the Amazon) can cause a hurricane in another part of the world. It’s a wonderfully romantic notion (heck even, Robert Redford mentions it in the 1990’s “Havana”) that supports all sorts of arguments about small changes extrapolating into massive changes over time. It’s sort of like the late Stephen Covey’s story about the trim tab on the rudder of a freighter – one degree of change could mean you miss Hawaii and hit Japan!

The truth is that in 1961 an MIT meteorologist named Edward Lorenz made a rounding error.

To save time he rounded off one of a dozen numbers representing atmospheric conditions from .506127 to .506 (don’t let me lose you here). To his amazement, this seemingly tiny change in numbers resulted in huge long-term changes to his weather forecasts.

His 1972 paper “Predictability: Does the Flap of a Butterfly’s Wings in Brazil Set Off a Tornado in Texas?” gave the Butterfly myth its wings (sorry).

Trust me nobody tested the impact of butterflies flapping their wings on global weather conditions.

Perhaps the most repeated fable in the annals of motivational speakers is the myth of the Yale MBA class of 1953. It goes like this.

The story, as told by motivational greats like: Tony Robbins, Zig Ziglar, and Jim Rohn, is that researchers surveyed Yale’s graduating MBA class of 1953 to determine how many had specific, written goals for their future. Only 3% did.

Twenty years later, the researchers returned for a follow-up study only to discover that those 3% who had goals had accumulated more personal wealth than the other 97%, combined.

It’s a powerful example of the value of goal setting and planning for your future. Unfortunately, it never happened.

It was a perfect myth – an Ivy league school and longitudinal study that nobody was likely to replicate, supporting the widely held notion that, well, goals work.

When Fast Company tried to find the source to the myth, including tracking down members of the 1953 Yale graduating class and asking both Robbins and Ziglar’s offices they came up empty handed.

Nobody from the graduating class remembers any such study and the Robbins’ office pointed at Ziglar’s team and (likely) vis a versa.

3. Five monkeys and a banana

The story goes that researchers studying herd behaviour placed 5 monkeys in a cage and in the middle was a ladder with a bunch of bananas on top. Every time a monkey tried to reach the bananas they were sprayed with cold water. After some time, if a monkey tried to climb the ladder, it was pulled back by its companions.

This experiment goes on until no monkey dares climb the ladder, even after the punishment has been removed and there is no obvious external threat.

Eventually, one monkey was replaced and when the new, naive, monkeys tried to reach the bananas it was pulled back by the more experienced monkeys. One after another all the original monkeys were replaced and each time the herd would inculcate the new monkey, pulling it back from the ladder, until finally, no monkey would dare climb the ladder, even though there was no sign of punishment.

If those monkeys could be asked why they resist climbing the ladder they would shrug their bony shoulders and say “I don’t know – it’s just the way we’ve always done things around here.”

While there were experiments to do with monkeys in 1967 by a G.R. Stephenson and previous studies dating back to the 1920’s with chimpanzees, none of them were anything like the final form of the “Five Monkeys” myth.

In one case, Stephenson did record a male monkey pull a monkey who was new to the experiment away from the bananas while two other males made “threat facial expressions.” it seems the myth of the 5 monkeys just sort of climbed the tree of knowledge from there.

If you liked the Five Monkeys myth, you’ll love this one.

The story goes that researchers (who are these mysterious “researchers” anyway?) working on a remote island, distributed sandy sweet potatoes to a colony of monkeys. Some of the younger monkeys learned how to wash the sand off the potatoes before eating them. Eventually they taught this trick to their parents.

More and more monkeys started washing their potatoes, until the 100th monkey learnt this trick – suddenly all the monkeys in the colony started to wash their potatoes.

Ah, but the myth gets better.

At that Gladwell-like tipping point of 100 monkeys the potato-washing trick spread over land and sea to other islands and – voila! monkeys on other islands started to also wash their potatoes.

In his best-selling book “The Hundredth Monkey” (over 1 million copies), author Ken Keyes Jr. uses this myth to demonstrate the power of critical mental mass: “When a certain critical number achieves an awareness, this new awareness may be communicated from mind to mind.”

As you might have guessed by now, it never happened. While it is true that on the island of Koshima many monkeys did learn how to wash potatoes. At one point the number of potato-washing monkeys reached 59. Period. No mysterious, island-hopping, mental transfiguration, just 59 monkeys who liked to wash potatoes.

A more recent update reports that even that number has now declined by half.

I’m sure you’ve heard this one.

The theory is we’re all (all 6+ billion of us) connected by no more than 6 people. And it’s compelling—doesn’t if feel good to know you live is a small world where people are somehow all related?

The problem is it’s not true.

Unfortunately, the world is a bit bigger and the six degrees of separation theory was never successfully tested.

The idea of six degrees was first written up by Stanley Milgram back in 1967 in Psychology Today – he referred to it as the “small world” experience.

To test the theory, Milgram mailed out folders across the United States to random people. In the folder was a description of a “target” person. If you received a folder you were asked to mail it to someone you knew by first-name. That person was supposed to mail the folder to someone closer to the target, and so on.

So why did the theory get so widely accepted. According to networking guru and founder of BNI, Ivan Misner it’s for two reasons:

So, the next time you sit down to write your blog, prepare your speech, or work on your next book, maybe think twice about including these myths.

Of course, the starfish story, Mary Poppins, and Easter Bunny are all fair game.