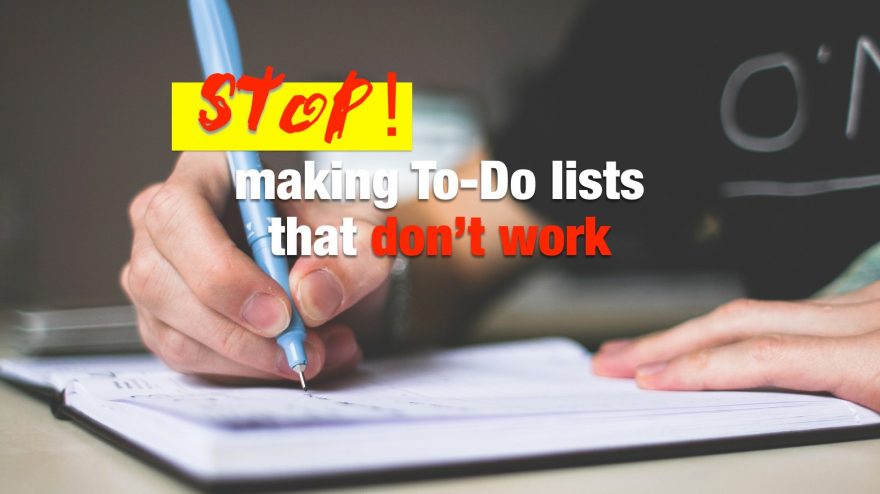 There’s something seductive about making a list – especially at year end. Our Disney-like dream is that everything we list will – poof! – magically get done.

So, we pull up a chair, grab our favourite pen, and with firm chin (whatever that means), open our journal to map our future.

As we write our first commitment, we quietly smile and think “This will change everything.”

Meanwhile, a little voice mumbles: “Ah, ahem, excuse me…haven’t we been here before?”

“Yes, Yes” we reply with insistence, “this time everything will be DIFFERENT!”

At year’s end (when I’m writing this), we really allow our fanciful self to speak up:

“Travel to Italy” you add, picking up speed

Your list building has taken on a breathless momentum – it seems almost anything is possible: write a best-seller? meditate in a Tibetan monastery? go viral on YouTube?

It’s not that I’m against lists—it’s kind of hard to go shopping without one.

Lists are fine: you can make a list of things to get done this week with my Plan Like A Pilot system or to organize your planning. “Keeping promises is considered a measure of one’s worth” writes Melissa Ritter, Ph.D. in psychologytoday.com “we prize being ‘as good as our word.’”

I’ve made lists until the cows came home—and ignored just as many. It’s not about the list – it’s about me and my story.

Last week I was on the road all week with clients. It was a great week. And the week before was just as busy. I was intently working from a list. I had to. I had a week’s full of work to get done before I left town and I had to prepare to leave.

In those times, my list is my bible and the system works.

It’s when I make a list about the future the system fails.

In some twist of reality, I overestimate my abilities, over commit my time and ultimately fail to deliver. The results are disappointing and my ego takes a hit. Not good.

In some twist of reality, I overestimate my abilities, over commit my time and ultimately fail to deliver. Click To Tweet

If you know what I’m talking about and you want to end the list-making fool’s game, here what I think are the 3 missing ingredients in your planning potpourri.

It’s great you want to lose 40lbs, but, to get there you first have to successfully lose 5lbs. I mean nobody went from living on the streets to earning $1M or from mail clerk to CEO without checking off a lot of steps in between. to do that you first have to lose 5lbs.

Nobody went from living on the streets to earning $1M or from mail clerk to CEO without checking off a lot of steps in between. Click To Tweet

There is no shame in creating a more modest, realistic list – call it “interim”, or “Phase 1.” A big part of your success long-term will comes from conquering the small, non-heroic small steps a long the way. Start small.

A big part of your success long-term will comes from conquering the small, non-heroic small steps a long the way. Start small. Click To Tweet

Let’s face it: you can’t step forward if one foot is anchored to the past—you need to close old stories and create new ones.

The brilliant psychologist and Auschwitz survivor, Viktor Frankl would ask his patients if they were to live this day over what would they do differently. That deceptively simple question forces us to look objectively on our choices – removed from the emotional attachment we might have to the outcomes. It can also lead to a new story.

My story used to be that busy equaled success. That bizarre formula drove my work ethic, but also burned me out. In my 30’s and 40’s, it became my badge of achievement. In my 50’s it was just damn irritatingly unsatisfying.

So I got equally busy with training, yoga, gym time, meditation and journalling. Now I was still busy but in other areas. My new story is that all of my success comes from thinking deeply about what matters and making smart decisions.

What story do you need to get more of what you want?

It while 90% of New Year resolutions fail – they don’t take the first step. They don’t get the satisfaction that comes from momentum and they quit.

We see this all the time with saving money, losing weight, getting more sleep and reducing clutter. The solution is simple, take some small action.

Here are some examples in my life of big goals and tiny (and some not-so-tiny) first steps:

Look, we’re all going to write lists – lots of them. We might as well do it right.

If you want to be even more annoyed by my rants about getting stuff done, here’s more:

Younger Next Year
Make this your year to speak up
7 reasons why your plans for 2014 will fail (and what to do about it)
How drinking tea can make you rich (and build willpower)
10 books that will make you smarter, richer and more fun to be around
Procrastinating about New Year goals? Make Origami instead
Final Post: My 2017 wish for you