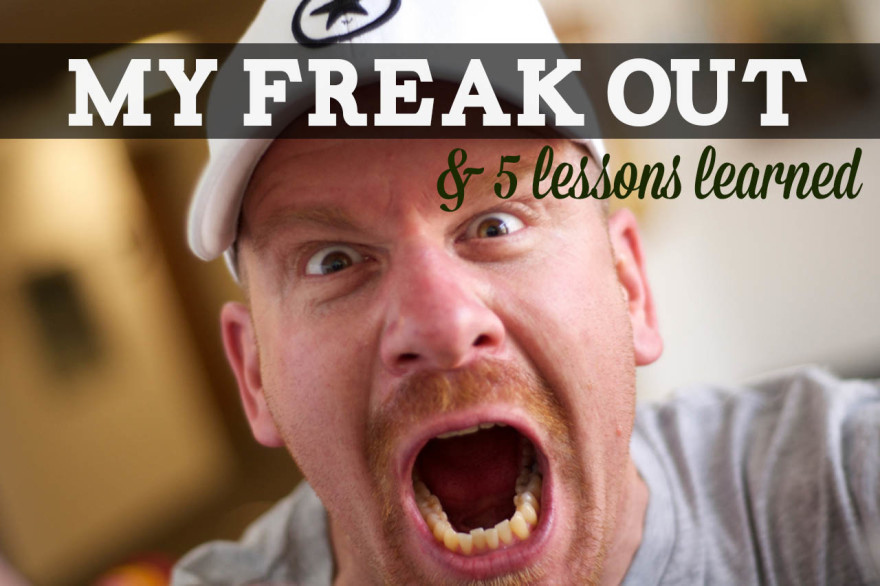 True confession, I really blew it last month. Not quite like hitting “the wall” at 30 kms in a marathon, but bad enough that I don’t want to repeat it.

I had taken on too much. I was clocking too many hours, and starting to feel like I had a J.O.B., instead of a lifestyle business. Can you relate?

I pride myself on being able to handle a lot of projects and have a few other plates spinning at the same time. After all, I’m one of the guys behind the incredibly complicated international launch of flights to the South Pole. I’ve built three successful businesses, been responsible for 35 staff, written a national best-seller and have always had three other projects running in the background. But, this was too much.

At work we were struggling with the launch of Time Freedom Formula, my new online course, chasing after more keynote bookings for my Fall season, designing a new website, wrestling with low book sales, and I was designing and promoting a new event to be held the next week.

Meanwhile, we just moved to a new office and, to save money, it was being renovated while we tried to work from it. Everyday we worked around plastic sheets, drywall dust, paint trays while our small team of electricians, painters, contractors, and drywallers pounded our new office into shape.

At home, we were breaking ground on my wife’s new physiotherapy/counseling clinic (attached to our house), both my daughters were crazy busy with multiple summer jobs, our partnership in a side business suddenly needed a huge cash injection, and I was spending a lot of time talking to people with the job title “senior lending manager”.

It was like playing Smack-A-Mole with a toothpick. Projects seemed to be progressing at a snail’s pace and I kept thinking of more things needing my attention and adding them to my list. Aaaaarg!

On top of jumping from project to project and getting even-more-frantic, I was worried. Hey! I’m supposed to be an expert on productivity. And I certainly subscribe to a healthy lifestyle. So, how did I get so obsessed with cramming more into my day and why am I not making progress?

And then the inevitable happened. It got worse. The more I focused on how frantic I was becoming, running from appointment to appointment, checking messages every five minutes, the more frantic I became. All I could see was my bloody list and how I couldn’t keep up.

So, of course, I had to add fuel to the fire by becoming irritable with people, staying up later than I should, waking up feeling defeated, skipping exercise, and (horrors!) finding myself most afternoonssnarfing down a what-the-hell-it’s-only-one, gluten-infested, chocolate and banana, half-pounder muffin.

I know you’ve been there.

It’s exciting to take on new projects and be tweaking old ones at the same time. The list gets longer, everything looks important, and stress goes up.

The worst part, for me, was this was a pattern. In my ambition to do even more, make even more, be even more, I get overloaded. Ambition and pride take the driver’s seat while good planning, and thoughtful pacing hold on for dear life in the back seat.

THERE IS ALWAYS A LESSON

I debrief every speech I give. It might be in the cab on the way to the airport, or on the flight home. But I always get out a notepad, draw a line down the middle of the page and make a “Plus/Delta”list. Left-hand side (Plus): what worked, went well, right-hand side (Delta) what could have been better.

This is my debrief. I’m happily back in control, exercising like a mad man, keeping my list short and purposeful, snarfing quinoa, instead of muffins and sweet-as-pie to everyone. So, now is the time to learn my lessons.

I’ve learned there are five strategies that will help you avoid the “freak out”, make better decisions, stay a bit saner, and smack more moles. Sound good?

This is old, but good advice. You have to pick one to three things you will get done today. A long list and dancing from task to task makes you frustrated and kills progress.

I create my Flight Plan (plan for the week) on Fridays (see Friday 15) and my Day Plan every morning. The temptation to overload the Day Plan is always there. It doesn’t work.

I’ll write “Get proposal to ############”, (a one hour job), alongside “Add opt-in gate to resource page” (given I don’t know how – at least one hour), alongside “Contact ASA grads about SOS” (easily another hour). So, there is half-day’s work and ten other tasks are on the list as well. Any one of those first three tasks would be enough to accomplish for one day, not three of them.

The lesson is, I have to pick one to three valuable, move-the-needle goals for the day and leave everything else on the Flight Plan. I can pull more work from the Flight Plan if I have more time. But, in the meantime, progress is my goal, not a longer list.

Building on #1, above, completion of tasks and goals has got to be goal #1. My bad habit (and it gets worse the more overloaded I feel) is to task-hop from list, to email, to file, to conversation, to email, back to list, to a bit of work, and back to email.

Instead, create boundaries on your time and treat them like client appointments. Work from a different location, turn your email software off, unplug the Internet, put your phone on airplane mode, and go to work. If you can work, uninterrupted, for an hour (taking stand-up breaks every 20 min) you are in the top 10% of achievers (I made that up, but I think it’s darn impressive).

I must get at least 10 new ideas everyday. Everything from marketing, to new products, to internal systems, to a new fitness routine.Maybe some are good, most are garbage.

The upside of a new idea is it helps my business, make me more organized, more effective, whatever. The downside is it whirls around in my brain, distracting me, and then lands on my list looking like it has precedent. Which it doesn’t.

Sometimes even great ideas need to ferment for a bit.

Like the 43 files system, I created a simple system to separate tasks, goals, and ideas by priority and time. In Evernote, I maintain six lists and update them every Friday, as I plan the coming week. It looks like this:

FLIGHT PLAN – most important to complete next week. These are realistic completions (instead of the whole goal, it might be a chunk to get done). Less than 12

JULY (whatever the next month is) – committed and date specific tasks

AUGUST (the next month)

SEPTEMBER (the next month)

All ideas go into “someday”and sit there fermenting until I see some reason to move them. The game is to protect my Flight Plan, design a super successful week, and to build momentum and confidence. The other lists are holding pots that get shuffled around as they become more (or less) important.

A bit self-evident, but this list wouldn’t be complete without stressing how important “No”is for sanity and success. Author, Tim Ferriss, famously calls this “Let small, bad things happen.”Twice last month I asked clients to move their appointments so I could make my yoga class. Small inconvenience for them, life saving for me. When in doubt, say “No”.

#5 DECIDE WHAT YOU VALUE

In saner moments I’m pretty clear what’s important to me. My relationship with Kirsten, being a guide for my two daughters, providing for my family, being a good friend, having a healthy body, learning, teaching, and making the world a bit better. That’s the stuff I really care about.

One more “great idea”, task, or project don’t even deserve a bullet point unless it leads to what I value.

My Mom, in her eternally optimistic way, used to always talk about a “blessing in disguise.”I guess my freak-out last month could have been that.

Write in the comments, below, what you think. I want to know.