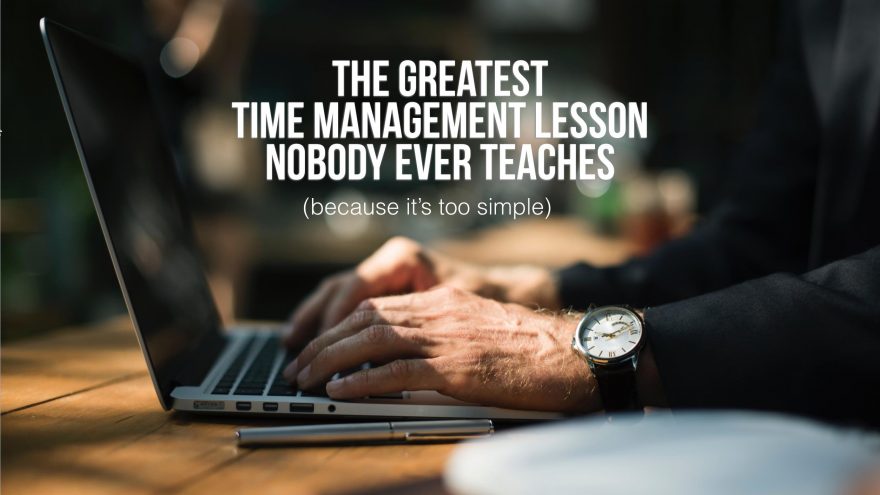 This time management lesson might seem too simple to be of value.
But, once you try it — just like chocolate dip on an ice cream cone — you’ll never go without again.

I’ll tell you what that lesson is in just a minute. But first, I ask you to close your eyes (actually you have to read this next bit first) and think about all the times in the past week you were feeling frantic, rushed, overwhelmed or just plain run-off-your-feet.

Quite a few times — right?

That’s why you need this lesson.

You see, history repeats itself, and so does the dumb stuff we do over and over.

This week, my goal was to phone 10 people as a follow up to an email. We’re running a campaign to offer a 14 day $1 trial of our BlogWorks social media program for bloggers. So I thought I’d call some people and just ask if they’d seen the email and did they have any questions.

Well, I’m writing this post on Friday and I still have 2 calls to go. It was only 10 frick’n phone calls and I couldn’t do it. Instead of making phone calls, here’s what was thinking:

“They’re probably busy – I don’t want to interrupt them.”

“Better check to see if that email I’m waiting for came in.”

Every time I looked at the phone I had an excuse ready.

It’s ridiculous! Think about all the incredible things you’ve done in your life. And you can’t pick up the damn phone.

That’s why this lesson is so important. In fact, it’s the one thing that changes everything.

The one thing that changes everything

You have to start.

(I warned you it’s going to sound too simple.)

You have to start by picking up the phone, walking into his office, writing the email, or typing that outline.

Starting can be the hardest step, but it can change everything.

I’ve been thinking about writing a second book. My first (and only) book Give me a Break came out 6 years ago and did really well in sales. I’m proud of it and it’s time to go through that writing process again.

But, I’ve been thinking “It’s time to go through that writing process again” for 2 years!

I was stalled out and letting resistance take over logic.

The war of logic and resistance

This is how I think of it.

In your brain (this has yet to be proven scientifically) there are the logic neurons. They wear white lab coats with pencil protectors and prefer Nabob instant over Starbucks. Logic neurons like everything in your life to be black and white, binary and making sense.

Your brain is also full of snotty nosed resistor neurons. They think logic is dumb, and find the negative in everything. The resistors believe electric cars are overrated. They hate self-help books and think high achievers are showing off.

And then there are the optimistic neurons – they’re excited about anything new. They love planning vacations (more than going on them), buying new blenders and the first three episodes of any Netflix series. They are irritatingly positive.

Your brain is at war.

Logic neurons understand how one step forward can lead to another and that’s how progress begins. They’re all about crossing work off your list and seeing results.

But those resistor buggers hate that stuff. Every plan has a problem and they love to grovel in excuses. “It’s too soon!”, “It won’t work!”, “We’re not ready!”, “They won’t like it!”

And the optimist neurons just can’t wait for SOMETHING to happen.

The battle is on and nothing is getting done.

Until you step in with the one thing that logic, resistor and optimist neurons have to listen to: progress.

That’s your job – even if you don’t feel like it – you need to start the ball rolling.

So I called my friend and fellow speaker Steve Donahue and asked for his advice. Steve is a two-time best selling author, a popular speaker and part-time coach to authors.

His advice was for me to write a short outline of all my book ideas. “Don’t worry about polishing, editing etc.” he told me. “Dump words onto the page.” We started with 5 ideas for a future book – I settled on four of them.

And that was progress.

First, the phone call that jump-started the progress. And then 2 hours to write the outlines. The next thing I knew I was getting feedback on my outlines from by BOS-Community group (they didn’t like the one I did).

Next week, Steve and I talk again about testing these ideas and measuring which one I feel committed to.

It’s all about progress and taking that first step.

It’s no different than finishing your taxes, purging old clothes or taking better care of your body. Your job is to take that first step (even if you don’t feel like it).

Tell me in the comments – WHAT STEP DO YOU NEED TO TAKE?

Related articles that will help you get started