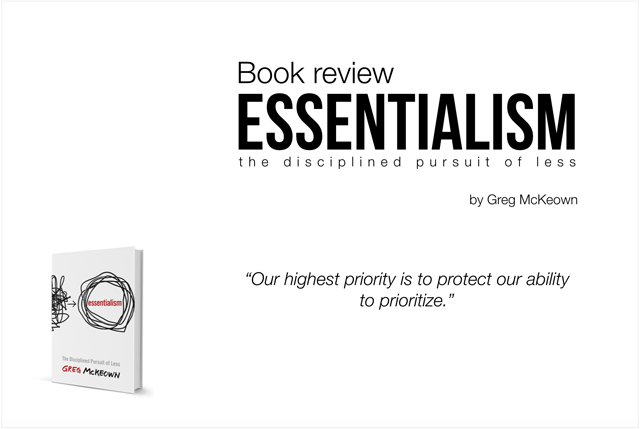 There’s good reason why the likes of Dan Pink (Drive), Chris Guillebeau (The $100 Startup), Reid Hoffman (co-founder LinkedIn), Michael Hyatt (Platform) and a host of other smart people rave about Essentialism: The disciplined pursuit of less by Greg McKeown.

It’s a book worth learning from.

McKeown wraps together disciplines for better personal leadership, insights on employee engagement, strategies for corporate success, with tips on better decision making and smart living. It’s one of the few books I want to reread – even before I finish the last chapter.

McKeown uses the term “Essentialism” to wrap together the best practices of mindfulness with smart planning. “The result is that by investing in fewer things we have the satisfying experience of making significant progress in the things that matter the most”

He breaks his approach to Essentialism into four parts:

1. Essence – getting down to what it means to move from “non-essentialist” to essentialism

2. Explore – this is where we assess and experiment with changing our patterns and habits to gain some essentialism magic in our work and lives

3. Eliminate – the ongoing practice of eliminating any and all low-value distractions that take us away from being truly effective

4. Execute – where the rubber hits the road with daily practices and small wins

1. Essence – what is the core mind-set of an Essentialist?

Choice is a central theme in Essentialism. Assessing your current reality and making hard choices so you are “…living by design, not by default.” If you have been reading my blog you will recognize The paradox of success. McKeown defines it as “The more success you get, the more distracted and unsuccessful you are.”

He boils the problem down to three issues:

We want more, but we are poorly prepared to accept it when we get it. So we work harder, run faster, sleep less, and complain more. Our “pursuit of success can be the catalyst for [our] failure.”

In “How the mighty fall: and why some companies never give in”, Jim Collins refers to this as “…the undisciplined pursuit of more.”

Like Herb Kelleher famously refusing to add more services to Southwest Airlines flights, the Essentialist thinks almost everything is nonessential.

“If you don’t prioritize your life, someone else will.”

McKeown recommends we fight hard to replace the three commonly entrenched assumptions: “I have to,” “It’s all important,” and “I can do both”

with: “I choose to,” “Only a few things really matter,” and “I can do anything but not everything.”

2. Explore – How can we discern the trivial many from the vital few?

The classic Eastern philosophy advice ‘do less to get more’ often falls deafly on our To-Do list mindset. We often blindly assume crossing more tasks off our list moves us forward. The opposite is true. Time to reflect and think is “critical to distinguishing what is actually a trivial diversion from what is truly essential.”

“Our highest priority is to protect our ability to prioritize.”

McKeown gives the example of the CEO who has all his 50 staff book off a full no-phone, no-email day for focus and planning. And Jeff Weiner, CEO of LinkedIn, who schedules two hours of blank space on his calendar every day.

Three suggestions for exploring Essentialism I liked are:

Malcolm Gladwell popularized the “10,000 hour rule” that separated the best performers (like the Beatles and violin virtuosos) from the just “good.” The lesser known distinction is that the best also slept the most (the best violinists slept on average 8.6 hrs – an hour more than their American counterparts).

2. Be more ruthless saying no.

In the words of CD Baby founder and popular TED talk presenter, Derek Sivers, your decisions should be “Either HELL YEAH! Or No

“Think of the single most important criterion for that decision, and then simply give the option a score between 0 and 100. If you rate it any lower than 90 percent, then automatically change the rating to 0 and simply reject it.”

4. Eliminate – how can we cut out the trivial many?

McEeown’s third phase toward Essentialism is to eliminate the trivial, starting with possessions. He recommends when it comes to ‘keep it’ or ‘toss it’ you ask this dealbreaker question: ‘If I didn’t already own this, how much would I spend to buy it?’ I know for clothes I haven’t worn in months the answer would be ‘not much.’

The process of elimination also starts with getting clarity. “When there is a serious lack of clarity about what the team stands for and what their goals and roles are, people experience confusion, stress, and frustration.”

Next is daring to say ‘no.’ For this he gives the endearing story of the late Stephen Covey turning down a client’s dinner date offer in order to keep a promised date with his daughter, Cynthia. “People are effective because they know how to say no.” (Peter Drucker)

Like the Concorde jet that kept operating, despite staggering financial costs, or you sitting through a stinker of a movie, or (even worse) staying in a toxic relationship, a weird sunk-cost bias twists our thinking to what we have invested in. In psychology, it’s known as as the endowment effect – we put more value on something we own. As McKeown puts it: “No one in the world has ever washed a rental car.”

Psychologist and Nobel Prize winner, Daniel Kahneman discovered students on campus trying to sell a coffee cup they owned would value it at least 100% more ($5.25 versus $2.25), than those who were simply trying to sell a cup.

My favourite strategy for eliminating is coined ‘reverse pilot’, by Daniel Shapero, a director from LinkedIn. Essentially, you remove something and see if it’s missed (like your newsletter, a regular Tuesday meeting nobody seems to enjoy, or summary report nobody reads).

“No one in the world has ever washed a rental car.”

4. Execute – How can we make doing the vital few things almost effortless?

After essence, explore, and eliminate, comes learning how to execute as an Essentialist on what is most important.

One hundred years ago the world read (albeit with the transcontinental news delay of the day) of the fatal outcome of the bumbling, and not-so-slightly arrogant Robert Falcon Scott and the seemingly effortless conquest of the South Pole by Roald Amundsen. Amundsen was a master at what McKeown calls: extreme preparation. 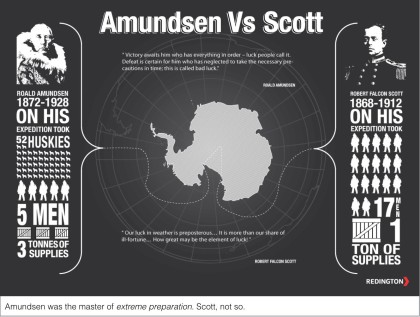 Start with your estimates of time needed. Kahneman discovered that students regularly underestimated time needed to complete their senior thesis to the tune of 25%-100% (on average they estimated 27 to 48 days, depending on how well their work went. The reality on average was 55 days – only 30% completed the task in the time they estimated.)

“Curiously, people will admit to having a tendency to underestimate while simultaneously believing their current estimates are accurate.”

In spirit of executing like an Essentialist, McKeown recommends the kind of successful habits that “make execution almost effortless.”

Like Michael Phelps famous pre-race routine, or my Plan Like A Pilot weekly planning, successful habits reduce your mental workload and, according to best-selling author of The Power of Habits, Charles Duhigg “means you have all this mental activity you can devote to something else.”

“Design a routine that enshrines what is essential, making execution almost effortless.”

Tell me in the comments below: do you want to live more like an Essentialist? What does that look like for you?