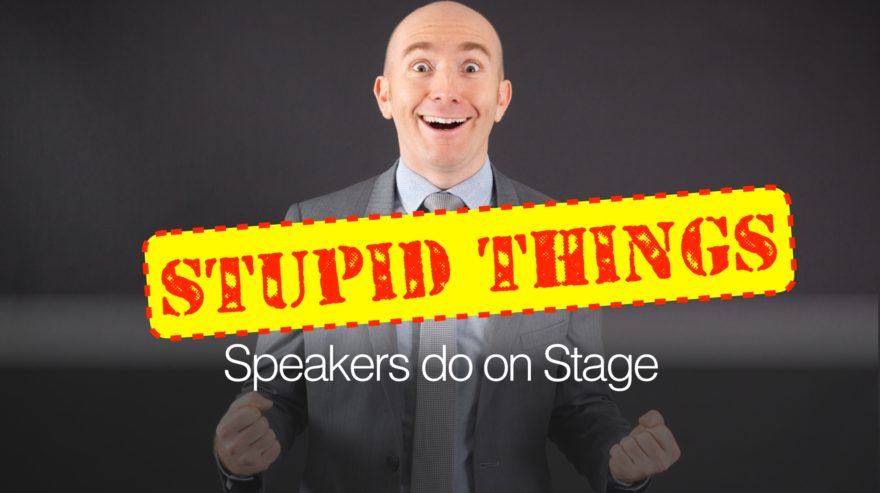 We’ve all been there – cringing in our seats – thinking “Will this ever end?”. Yes, it’s the speaker from hell.

Maybe they’ve got great content – even lessons we haven’t heard before. But their delivery is so finger-nails-on-chalkboard bad we’re missing it all.

I had a few thoughts in mind before I penciled this post, but what better way to create a lists of stupid things speakers do, than to reach out to a group of professional speakers (all of these contributors are pro’s with, and I’m guessing here, over 1,000 presentations under their belt) who get the joy of watching these train wrecks every week?

Enter my compiled (I feel a follow-up post coming on) list of stupid things speakers do on stage.

My intention is not to make us look better (#2), but to provide sage feedback from my well-travelled colleagues (#4) such that this maybe makes you giggle a bit (I was freely snorting, guffawing and smirking as I read some of these), but also perhaps alter your course on stage a few degrees away from these pitfalls.

And now, welcome to:

THE (NOT SO) OFFICIAL LIST OF STUPID THINGS SPEAKERS DO ON STAGE. PART 1(?)

Being on stage is a privilege. Being paid to be there is a responsibility. The fastest way to turn off an audience is to make your time in the spotlight all about you.

As speaker veteran Connie Podesta, puts it, “When you are on stage, you are getting more per minute than most people earn per hour, per day or per week. That’s their time, not yours…at most, you can shout out, ‘Hey guys. I have some great stuff at the back of the room,’ and dive right back into the presentation they paid for and deserve.”

“I’m at an event right now, and this speaker has delivered a 20 minute sales pitch that has emptied the room.” Christopher Penn

“I’ve seen so many sponsors who get five minutes on the main stage as part of their package. And they spend those five minutes with a hard sell. They may feel they’re entitled, but that doesn’t make the audience any more receptive (maybe a little more tolerant about it, but it’s still let’s-check-Twitter time).” Rob Cottingham

2 – Making it all about you

Standing on stage, in front of an audience, automatically makes you different. And then when you, as Neen James says, “Focus on themselves. Make it all about themselves.” you make that gap bigger.

Your job is to bridge that gap, be relatable and to gain the trust of the audience. A simple thing is to use “you” more than “I”.

I also caution new speakers from using too many stories about taxi’s, hotels, and airports – because that’s not how most people live and it creates more distance.

“Re-introducing self ‘As he said, I’m Fred Author and…’ UGH – don’t do that.” Carrie Owensby Wilkerson

Don’t treat your audience like idiots. They’ve heard other speakers, watched TED talk videos and read books. When you used a thread-bare story, like the Ziglar-era Starfish Story (hat tip to Neen James) you confirm their worst nightmare: that you don’t respect them.

“My personal pet peeve is the ‘footsteps in the sand’ story.” Nick Morgan

“Every time I hear the “goldfish have a larger attention span” statistic I just throw up in my mouth a little.” Neen James

“Including any stats on the importance of body language in your talk will just be plain 93% inaccurate! Take it from an expert.” Mark Bowden

“Using lazy/empty claims like: ‘Studies say…’, ‘Science says…’, ‘Research has shown…’ without a single reference mention or on the slide.” Scott Berkun

“Playing a drone video of a heaving Chinese metropolis and then saying ‘China will be the next world economic power.’ And then pretty-much leaving it at that with no further detail, explanation or insight.” Mark Bowden

And in case you are wondering, 98% of all statistics are made up.

In your speech, nobody will miss what isn’t there. So, when you screw up, forget something or don’t have all the time you’d like – shutupaboutit!

Nobody needs to know and nobody SHOULD know.

“Anytime there’s a justification or rationalization. ‘Normally I speak for 60 minutes but only have 30 today’ or ‘I would usually do this but for whatever reason can’t’ or fake premises, like: ‘I was at the store the other day.’ Judson Laipply

And the winner of making excuses…

“Saying ‘If I had more time, I’d go into detail, but you can stop by booth X and I’ll tell you more.’” Christopher Penn

I could do an entire post just about bad powerpoint (actually I did here). Suffice to say, dear speaker, your slides should ADD to the value you bring, NOT be a distraction.

Saying ‘I know you can’t read this but….’ – makes me crazy.” Neen James (Nick Morgan calls this “arguing with your slides,”

“Leaving a slide up long after the part of the presentation where it was relevant.” Rob Cottingham

“Reading your own slides – or – staring at them too long, admiringly. (Guilty! Did this today, caught it on camera, so ashamed. I was just thrilled the slides worked I guess! I am repenting).” Jason Hewlett

And the big winner of Slideawful…

“Pointing the remote at the screen when advancing slides.” Tamsen Snyder Webster

When I speak on stage I’m being paid what some people earn in a day – every minute. More importantly, my client has put their trust in me—they want results.

What I say in each minute should have impact. This is true whether you are a leadership expert there to help us delegate better or a juggler trying to lighten our day and remind us anything is possible.

“Saying ‘Am I right or am I right?’.” John Michael Morgan

“When the speaker finished the point of the slide and says ‘OKAY?’ as they turn and read what’s on the next slide… That leads us to the other word… “AGAIN”… Because they’ve accidentally already made the next point on the previous slide – so they say ‘AGAIN’, the point is to…” Robert Rose

And the Verbal Vomit winner is…

The call and response speaker technique has been around since the invention of the microphone (actually, I have no idea when it popped into some speaker’s mind). And it has failed for just about as long.

There’s nothing wrong with audience interaction. In fact, I get my audience involved in some way about every 10-12 minutes (learn how in this post). The challenge comes when the audience feels manipulated, or talked down to, “As though the audience is full up a bunch of idiots.” (Marc A. Pitman)

“The guess-what’s-in-my-head question. Alas, I have sinned along those lines…..Now I’m a reformed sinner asking only open-ended questions….Really.” Nick Morgan

“I have literally shouted out to speakers: ‘We have absolutely no way of getting the answer right!’ to questions like ‘And what do you think was their top seller that year — and it’s not what you might expect?’ or ‘And what do you think she said — and it was pretty surprising?’ or ‘And where do you think I’m going with this? A little clue — it may not be where you think…’ — We have absolutely no [expletive] idea! Just tell us and then get the [expletive] right off the stage… please!” Mark Bowden

“My all-time pet peeve is the speaker who gets the audience to say something back at him/her and then says, ‘I can’t hear you!’ to make them say it again louder.” Nick Morgan

“Setting the audience up for failure. It drives me nuts when a speaker asks a question like, ‘What’s the biggest reasons businesses fail?’ As the audiences raises their hand and answers, the speaker repeatedly says, ‘NO. Who else?’ As if there is ONE answer to that question!” Ian Altman

“Went to a whisky tasting with a big shot whisky guy once. First two questions were trick questions. ‘You’re all wrong’ he’d say, after getting entire audience to agree on some apparently obvious point. After that, nobody dared answer any of his questions one way or the other. It was awkward.” Matthew Kimberley

And the Call ’n response winner is…

“Asking the audience to repeat something aloud, or repeat some crap line or word while punching their fist in the air in unison.” Bob Gray

As if you haven’t got a long list already, in this final collection, we have some random things speakers do on stage, ranging from being rude, going overtime to inappropriate humour.

“Mispronounce a vendor’s name (mangling it badly, twice) causing three of their reps to walk out. #whoops” Clay Hebert

“Three taps on the microphone… ‘can everyone hear me?’” Mark Bowden

“Quit forgetting about your off-stage persona. Speakers are “on stage” the minute they enter the event area. How do they treat the AV team, the crew and the staff? How do they go about getting correct staging, lighting and deliver handouts? Do they require special water? Give me a break. Bottom line: Your true character shows through off stage way more than on stage. Be an absolute pleasure to work with—not a pain.” Connie Podesta

“Sexist and/or inappropriate jokes (blonde and “wife” jokes being popular.) Inappropriate disclosure of things (like what their CEO did last night at the cocktail party.) On a personal note, If I hear my husband and I get introduced as “the claim wizard and his little lady” once more I will physically knock out teeth.” Lynette Young

“Speakers who don’t make their slides available, or a reasonable summary (say, of the references they made during their talk) – especially when they include far more information than anyone can follow much less remember.” Mark Bowden

And the winner of showmanships is about going overtime. Sure, your event planner might encourage you to “take whatever time you need” – don’t do it!. Not only are you competing with 300 full bladders, you’re gobbling precious time from the next speaker.

Sure, you got another 10 minutes of fame, but as speaker, author and marketing expert, Ron Tite says it’s simply “unprofessional.”

So, there you have it – what NOT to do on stage.

9 Stupid things speakers do on stage from Hugh Culver

Add your own in the comments below (it could be the start of Part II).