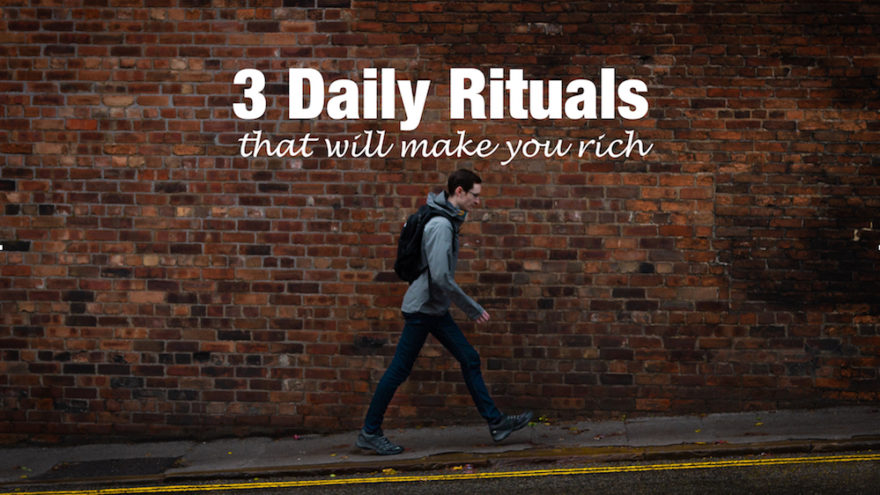 This post was originally published in January 2017 and was updated March 2019.

This message is so important, I worry my fumbling writing efforts won’t do it justice.

You see, I want you to be rich.

I want you to feel wealthy – free to make decisions you need and want to make. And I want you to be free of the dark blanket of worry that I see burdens so many and drags them into playing it small.

Just to be clear: this isn’t about possessions or cash in your wallet—it’s about the experience of abundance.

For most of us (myself included) we grew up with a poverty mindset – there’s only so much to go around, so be careful not to lose. Oh, we might talk a big talk about income, wealth, savings and growth.

But a poverty mindset isn’t obvious—like software. It’s there, running your programming, twisting each decision, clouding your thinking and you assume it’s the way it is – as if it’s permanent.

When I was a kid, clothes were handed down, we bought old cars (“You know you lose a quarter of a new car’s value as soon as you drive it off the lot!”) and a restaurant dinner was what we saw other people do.

We weren’t poor, but we certainly weren’t learning about abundance, or what it feels like to be rich.

In a binary sort of way, I used to think being rich was only about bank accounts and how many days you can call “vacation.”

It’s not that simple.

“A person’s relationship with money,” says behavioural economist Sarah Newcomb, “is almost never about the numbers. It is about the stories we tell ourselves because of those numbers.” To tackle those stories we need to understand there is enough to go around.

Enough to go around

It’s easy to compare ourselves to people who are more successful: taller, richer or have better abs. Get into almost any group and somebody has something or is doing something better than you.

The real harm is when we somehow believe we don’t deserve better, as if what we want is in limited supply. This scarcity thinking can even lead to being “…resistant to taking care of ourselves as fully as we can.” says clinical psychologist Suzanne Lachmann.

So we don’t attempt to save, get in shape, eat better, or invest in education. After all, if you don’t deserve it, what’s the point?

The truth is you do deserve it and there is enough to go around.

If I was to make of list of lessons that changed to course of my life, this would be first on the list: you can your programming. A bit a time, you can trim away the edges of years of programming to install the version you want for the next 5, 10 or 50 years.

I started with 3 rituals.

Call them habits, mantras, observations, or – Oh, I know – upgrades. Practicing these rituals won’t miraculously pay off your credit card debt, give you six-pack or get you a raise. You won’t be taller, smarter, or more attractive either (sorry.) But, you will be doing something 90% of people never think of doing: choosing how to live.

Here they are – 3 deceptively simple rituals that could quite simply change your life and make you rich.

RITUAL #1: Notice abundance. Walk in nature, appreciate people who have something you want (don’t dismiss or envy them) and reward yourself (like with a special cup of coffee, a book you’ve been wanting to read, or an overdue yoga class). Your goal is to become comfortable with having wealth in your life.

You may be living with a debilitating disorder – it’s call the “psychology of scarcity” (Daniel Kahneman)—the belief that there isn’t enough to go around. This can have short-term impacts, like relying on usury lending rates at payday lender outlets (there are now more of these outlets in the United States than McDonald’s and Starbucks outlets, combined). It can also impact your decisions, by playing it safe or not asking for what you want.

Again, I’m not fixating on money – this is about abundance in nature, having enough to eat and being able to walk without fear in your neighbourhood. This is the growth mindset coined by Stanford psychologist Carol Dweck that can lead to better decisions and even a longer life.

The only difference between people who have more of what you want and you comes down to what you focus on. Abundance is all around you.

The only difference between people who have more of what you want and you comes down to what you focus on. Abundance is all around you. Click To Tweet

RITUAL #2: Take 2 minutes at the end of every day for gratitude. As simple, hackneyed, and cliché as it might seem, there is science to back-up the practice of gratitude. In one experiment, writing letters (even if you don’t send them) or phoning to express gratitude to someone influential in your life resulted in a measured happiness increasing by as much as 400%.

And when you express gratitude (even just thinking how grateful you are) has lasting effects on your brain and well being that can be measured days and weeks later.

In one series of studies, using fMRI scans, researchers found that expressing gratitude (thinking, writing, or calling the person) showed greater neural sensitivity in the medial prefrontal cortex, a brain area associated with learning and decision making. “Simply expressing gratitude may have lasting effects on the brain.” reported researchers Joel Wong and Joshua Brown, “While not conclusive, this finding suggests that practicing gratitude may help train the brain to be more sensitive to the experience of gratitude down the line, and this could contribute to improved mental health over time.”

Do you have a blog? The BlogWorks Amazing Headline Analyzer will quickly give you a rating and feedback on your headline. Try it right now!

RITUAL #3: Ask for what you want. The more you ask, the easier it becomes. Go for simple asks, like to go ahead in a line because you’re in a hurry, or have interest fees charges waived from a missed a credit card payment (which I just did this week!)

I’m writing this from Wailea, Maui listening to the calls of the Mynas, sipping Ceylon tea as the morning warms up. In a few minutes we’ll be paddling out into ‘Alalaleili Channel to spend the morning watching Humpbacks breach.

Crazy right? How did this happen?

Simple, I asked for what I wanted (in this case to borrow a friend’s condo).

When you ask for what you want, resistance lets go of the steering wheel and opportunity can move into the driver’s seat of life.

When you ask for what you want, resistance lets go of the steering wheel and opportunity can move into the driver’s seat of life. Click To Tweet

My experience has been that when I speak up and ask for what I want more often than not I get what I need. As Mick and the boys put it, “You can’t always get what you want, but if you try sometimes, you might find, you’ll get what you need.”

On more than one occasion, my client hasn’t had the budget to hire me at my fee. I could thank them and walk away. But, if I want the opportunity I need to ask for want I want. When asked if instead of paying my speaking feee they would buy a copy of my book for all 400 delegates (close to the equivalent of paying my fee) they wrote a cheque.

If we are going to do good on this planet we need to know we can make a difference. Call it power, abundance, karma or confidence…I want you to be rich.

“If you really believe that abundance is available to all,” says Michelle Rose Gilman, founder of Fusion Academy middle schools, “you’ll end up attracting your own abundance.”

For more reading on abundance and creating wealth:

In this post “Want to make more money? Solve a bigger problem” I argued for raising your value in the market by solving bigger problems. A great starting point is to run a quick survey of your audience and ask them what they need.

In the post, “Want to make more money? Look in the mirror” I wrote about “turning up” your money margin so you are ready to receive more money. Sounds weird, but once you admit you’re wired to a money-set-point (money margin) it only makes sense you can change it. Here’s the 5-step formula I use:

If you want some incentive to turn your back on that chocolate chip carrot muffin, read “How to get rich by spending less money (it’s easier than you think)” – if nothing else, you’ll save $1,000 this year.

Photo by matthew Feeney on Unsplash