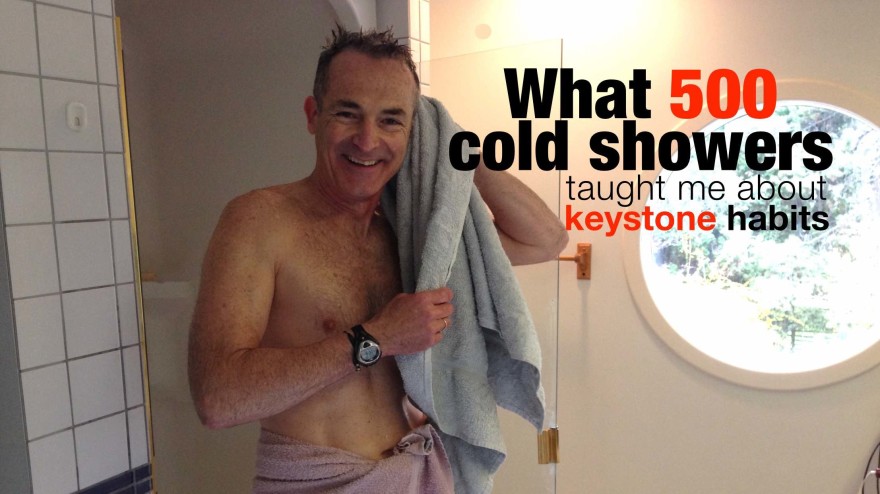 I take cold showers. There it is.

There is something bracing about stepping under a cold shower. All that fiddling with knobs, toe-testing, and mindlessly waiting for the oh-so-just-the-right temperature is a fools game. Step up, turn one knob, get on with your business—cold showers are the way go. They also can be your keystone habit.

It all started somewhat innocently in September, 17 months ago. Somewhere buried in the 570 page behemoth The 4-Hour Body by Tim Ferriss, was mention of how Olympian Michael Phelps would choke down 12,000 calories a day, some 9,000 more than he should have burned given his training regime. It turns out, the extra burn came from losing heat in the pool—being in cold water burns calories.

I was intrigued. Enough so that I’ve braced ice-cold showers through two winters, including a month in Nepal and a trek to Everest Base Camp. I’m hooked and, as I would later learn, I developed a keystone habit.

My cold shower is a keystone habit – it makes my ability to keep other habits even stronger. Like making your bed, each time you do it you build habit-keeping muscles. Author of The Power of Habits, Charles Duhigg, says: “Keystone habits start a process that, over time, transforms everything.”

“To promise not to do a thing is the surest way in the world to make a body want to go and do that very thing.” Mark Twain, The Adventures of Tom Sawyer

In one study, sixteen hundred obese people were asked to write down everything they ate, at least one day per week. At first the journaling was inconsistent—people forgot, or would snack and forget to record it. Many did start to keep their daily food log. Eventually, it became a habit. And slowly, over time, something strange started to happen—they started to take better care of themselves. Unhealthy snacks were replaced by fruit, some exercised more, some started to plan better meals, rather than junk food from the fridge.

Six months into the study, people who had kept their daily food records had lost twice as much weight as everyone else. They had created a keystone habit.

Keystone Habits to Try On

Here are somewhat random examples of keystone habits to try on. Remember, it’s not so much about the new habit (although all of these are good habits), it’s more about strengthening your resolve to be better in many areas of life:

“When people start habitually exercising, even as infrequently as once a week, they start changing other, unrelated patterns in their lives, often unknowingly.” Charles Duhigg, The Power of Habits

When I step into that cold shower, a little check mark is made somewhere in my psyche that says I am a promise-keeper. I keep promises with my wife, my kids, my employees, and myself. I know in a few minutes I’ll be warm and dressed – there’s no long-term physical impact. But every day, the instant I step under the shower head, I win.