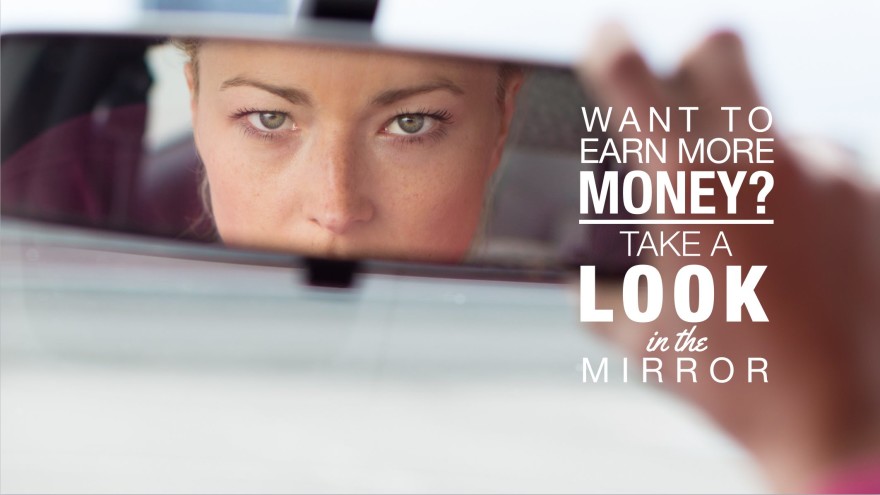 What are you worth?

If you parcel up your most valuable organs (heart, lungs, kidney…) apparently you can fetch upwards of $2M on the black market. A little inconvenient long-term, but good cash.

But, what are you worth in terms of earning power?

I grew up in a big family – eight siblings. We were frugal, practical, and always had Mom’s fresh bread, a full fridge and a bike to get to school. I also remember there was never a new car in our driveway.

In fact, one year Mom hand painted (with a paint brush, please note) our old Rover so we could milk a few more years out of the family car rather than shop for a replacement.

My Money Margin was set.

We all have one. Like a governor on an engine – it doesn’t matter how much you try or worry about it, you have a set limit on the money you will earn.

Some people have a Money Margin set at $40,000 per year, others at ten times that. Both like hockey and watching House of Cards. But one is just attracting a whole lot more loot. “The sad part is that when someone has a limiting belief,” says Matt James, Ph.D. “they don’t even test that limit.”

In this article I’m going to dig into the mysterious Money Margin and maybe even help you earn more money (without selling a kidney).

What is your Money Margin set at?

In my early 20’s I thought I would graduate from motorcycles and fixer upper’s to a proper car. I was earning good coin as a rafting guide so I bought a top-of-the-line Subaru. I think it lasted a year.

At first it was a novelty to drive a car where everything worked. The problem was I was so self-conscious I couldn’t enjoy driving it. I’d never been around nice cars and I was surprised how uncomfortable it made me feel.

My Money Margin took hold and I replaced my shiny new ride with yet one more fixer-upper.

The phenomenon of limits isn’t reserved to just new cars. Some lottery winners are broke after just six months and despite decades of pining for retirement, many new retirees are miserable.

Mind power is a hard sell.

Blaming mysterious external forces is always sexier. It’s not my fault – blame it on the economy, housing market, oil prices, my boss, client ignorance, my staff, my dog.

People who accumulate wealth see it as their right. They welcome it and naturally ask for more.

For them it’s normal. They don’t have a margin on earnings – they have an appetite for wealth.

They don’t have a margin on earnings – they have an appetite for wealth.

Anyone can have more money. It happens all the time.

A client comes through with a juicy contract, dear Aunt Eunice leaves you a chunk, or your boss wakes up feeling benevolent. Boom! You have more money than yesterday.

Now your Money Margin kicks in. Either you accept your new found largess as normal and rightfully yours or silently push it away. If you’re nodding your head right now let’s go one step further.

The eye only sees what the mind is prepared to comprehend. Robertson Davies

Turn up your Money Margin

Put up your hand if you’d like to make more money?

I don’t care if it’s to pay off credit card debt, take a well-deserved trip to Cancun, or give it all to your local homeless shelter – money is handy.

It took me a long time to realize that if my Money Margin was set too low then making more money wasn’t an option.

Just like the thermostat in your home, I had to turn up my Money Margin.

I discovered there are five ways anyone (read: you) can do this:

If you must doubt something, doubt your limits. Price Pritchett

1. Learn to be uncomfortable
Nothing happens in life without tension. Until you are driven to change your Money Margin status quo (create tension) the path of least resistance always win. 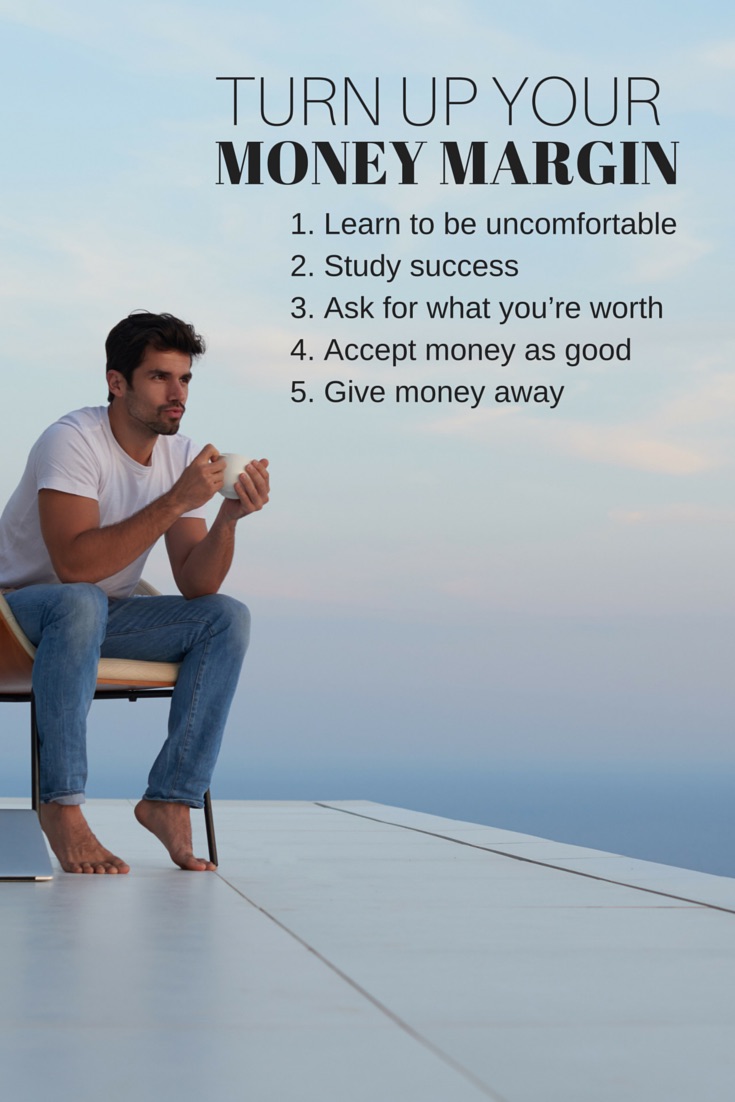 Creating a Wealth Dashboard with a list of all my assets and debt and a single Net Wealth number staring at me was a game changer. Sure I had lots of investments, but the current net result after all my debt was paid off wasn’t going to carry my family very far. There was the tension I needed to give me a kick in my assets and build more net wealth.

Where’s the tension for you?

2. Study success.
It’s easy to notice rich dysfunctional people, the news stand is full of them. Giving you attention to what doesn’t work is learned helplessness. The trick is to start to notice wealthy people who lead good lives, have fun, do good work, and contribute.

Notice how they lead their lives.

“I found in my research that wealthy people are by and large optimists,” Says Thomas Corley, who spent five years analyzing what he calls “rich habits.”

The average person believes obsession is a bad word. The truth is wealthy people have a healthy obsession with getting what they want, which includes money. Steve Siebold

3. Ask for what you’re worth.
If you are a service based business ask for what you are worth and know you deserve to be rewarded for your efforts. The more you proudly announce your fee the stronger your sense of value and acceptance of the rewards that come with that. Discount your services and you discount yourself.

4. Accept money as good.
“Most people have a dysfunctional, adversarial relationship with money.” says Steve Siebold, author of How Rich People Think. “After all, we are taught that money is scarce — hard to earn and harder to keep.”

When you see money as a good force you awaken to all the good you can use it for and start attracting more of it to you. Support a favourite charity (or start your own), spend more time with family in need, or simply sleep better – when you accept money it will accept you.

5. Give money away.
Want more happiness? Give money away. Elizabeth Dunn, a psychologist at the University of British Columbia found that pro-social spending actually makes people happier than personal spending.

In one experiment, groups of college students were given five and twenty dollar bills and  then split into two groups. Half the participants were told they can spend the money on themselves. The other half were instructed to spend their money to buy toys for children in need and on other charitable giving reported an increased senses of meaning, enhanced mood and overall better feeling of well-being.

As my Mom used to say “What comes around goes around.”

→GET A COPY OF MY NET WORTH SPREADSHEET