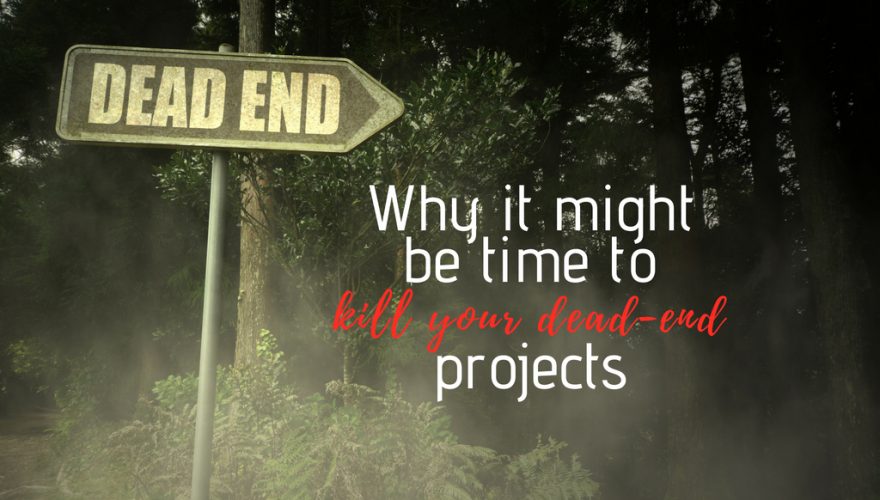 When Steve Jobs was unceremoniously ousted from Apple in 1985 the fate of the company was supposed to improve. John Scully had moved into the CEO office and brought with him all the corporate sensibilities of big business America.

Fast forward 12 years, product lines were bloated, sales had plummeted and Apple was no longer the darling of Silicon Valley.

As Walter Isaacson, author of the must-read biography “Steve Jobs” wrote in a Fortune article, Apple was: “back in crisis mode, scrambling lugubriously in slow motion to deal with imploding sales, a floundering technology strategy, and a hemorrhaging brand name.”

Apple had become mired with internal politicking, slow decision making and failed launches. But the main problem – the one that only Jobs could see and eventually fix – was they needed to kill their dead-end projects.

In 1997 Jobs returned to the driver’s seat and immediately launched into what became one of the most talked about corporate turnarounds.

Within one year Jobs had slashed 70% of Apple’s products. He reduced their workforce by 3,000 and flipped a $1B loss into a $309M profit the following year. The rest, as they say, is history.

Sometimes we all need to kill dead-end projects.

It’s human nature to collect things and then struggle to let them go. We all have closets bulging with clothes we’ll never wear, shelves packed with food we’ll never eat and lists full of tasks we’ll never do.

Our desire to hang onto things we’ve collected is a weird twist psychologists call the Endowment Effect—we put more value on what we have than it’s really worth.

We all have closets bulging with clothes we’ll never wear, shelves packed with food we’ll never eat and lists full of tasks we’ll never do. Click To Tweet

In a previous post, I wrote about Nobel laureate Daniel Kahneman’s famous experiment with college kids and coffee mugs. The idea is that if you own the mug you value it at twice the value put on the mug by the potential buyer. That’s the endowment effect in action and we all do it.

We overvalue the old junker that leaks oil, think our investments are worth more than they are on paper, and think that because we wrote a new speech or are halfway through writing a new book the market should come running to our door.

As long as we hang onto everything we can’t see what is possible to create. It’s the 80/20 rule all over.

Scully created a monster of complexity and was so busy maintaining and upgrading the 80% that only generated 20% of profit he couldn’t see the need to reduce the scope to the 20% that created 80% of returns.

As long as we hang onto everything we can’t see what is possible to create. Click To Tweet

Why I stopped teaching speakers

For three years I taught public speakers how to grow their business. I called my program BOSS (Business Of Speaking School) and I was good at it. It didn’t hurt that it was also quite profitable.

Within 2 years BOSS was a six-figure business with students from 9 countries. I was getting great reviews, students turned into coaching clients and it would have been easy to double or triple the business every year.

Hunting down dead-end projects to kill

Imagine you made a list (and this is a great exercise) of everything you are working on, or want to work on. What half-finished, or imagined, projects are clogging up your mental capacity and creating stress but aren’t going anywhere?

It could be remodelling your kitchen, writing that book you’ve always dreamed about, or hiring the perfect assistant. All are great ambitions and some might even create some advantage. But as long as you think about them every day you hold yourself back.

Remember, as long as you’re holding the “mug” you will think it’s worth more than anyone else. You’ll be inclined to hang onto it, polish it, talk about it, and convince yourself it’s worth hanging onto.

It felt bad pulling the plug on the BOSS program. I’m not a quitter and it was hard to turn down requests that kept coming in. I’d also put a lot of effort into the design of the program, shooting the videos each year and marketing. I had an investment, but I wasn’t invested.

Once I made the decision to stop and redirect my focus and energy to projects I was more invested in, everything changed.

That decision allowed me to grow BlogWorks, launch I Give A Dang project in Nepal and enjoy a whole lot more freedom.

Sure, once in a while I think about ‘what could have been’, but I don’t regret the decision to change tracks. We all have to make tough decisions, especially when it comes to clearing our lists of mental clutter and the possessions and projects that, in the end, won’t take us where we truly need to go.

What about you, what are you hanging onto that makes you blind to what’s possible? Let me know in the comments.

Want more articles about clearing your clutter? Check these out:

The 1, 2, 3 step remedy to becoming clutter-free
Why you are so damn distracted and how to finally get stuff done
Please stop making To-Do lists that don’t work