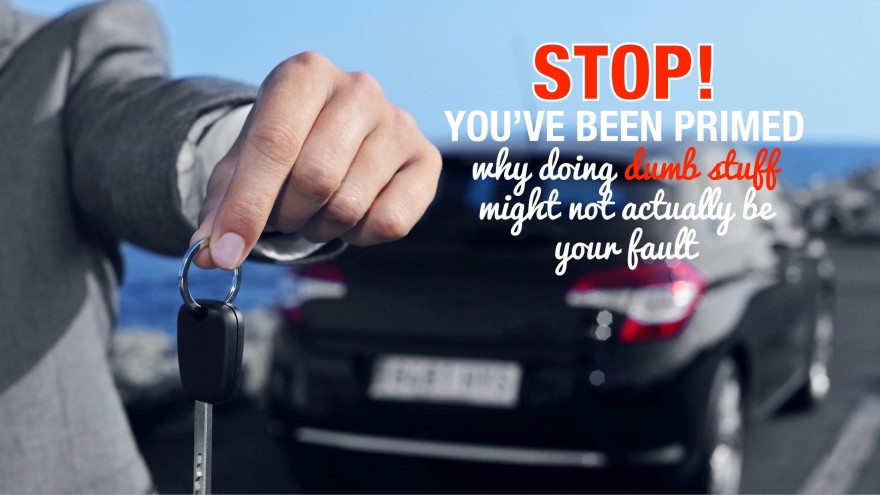 Last week my I was in a tizzy. Not a completely abnormal state, but the reason for my frantic searching is actually fascinating.

The back story is my youngest daughter received a letter announcing she was up for an athletic award and was invited to a Mayor’s reception. Days after the letter arrived, I wanted to know where the tickets were. No tickets.

For the next twenty minutes, assuming the worst, both of us tore the house apart looking for the lost tickets. No tickets.

In desperation and as a final resort, I reread the letter, only to discover this sentence: “You will receive your tickets at the event.” They couldn’t find the tickets because there were none in the first place.

How often do you rush ahead, based on an assumption, only to realize much later you were in the wrong lane, going the wrong direction?

“How often do you rush ahead, based on an assumption, only to realize much later you were in the wrong lane, going the wrong direction?”

This phenomenon is called priming – the influence of an action by an idea. In his brilliant book, Thinking, Fast and Slow, Daniel Kahneman reports how, in one experiment, when random people were asked “Do you now feel a slight numbness in your left leg?”, many reported they did.

Sometimes how we frame a question makes all the difference. Try these two versions on:

“Where are your tickets?”

“Do you know if you have tickets?”

The first question, in effect, creates the assumption you have tickets. Now, it’s only a question of where they are. The second question puts the whole ticket situation in doubt. Do we have tickets? Do we know where tickets are? Let’s find out.

It’s no different than warning an employee this is the “crazy busy season”, or a certain client is a “real handful.” Once the idea is dropped into our mind, it’s hard to not act differently.

Car salesmen prime us by being first to say the price of a car. If you’re told the three year old VW Jetta you have fallen in love with is $19,500, it seems wrong to start negotiations at $14,500 (which is the Blue Book value in Canada).

“Did Mahatma Gandhi die before or after the age of 9?”

“Did Mahatma Gandhi die before or after the age of 140?”

Obviously, these are not helpful questions. I’m sure you quickly rejected both the “9” and the “140” as clues and did your best to guess the actual age of his death.

But, hold on there Trigger – you’ve been primed.

Why does this crazy behaviour happen so frequently and easily? One theory, according to psychologist, Jeremy Dean is it “stems from our tendency to look for confirmation of things we are unsure of.”

In the case of buying the used car, you aren’t likely to be an expert, so the salesperson’s offered price confirms your suspicion the car will cost more than you want to pay.

Drop anchors and get unprimed

Fighting the effects of priming is somewhat of a Herculean feat. Here are a couple of suggestions to experiment with.

The next time you suspect you’re heading down a rabbit hole (or frantically looking for tickets that don’t exist), stop and take a moment. It could be you’ve been primed and there’s a whole world of alternatives outside that will get you what you want.