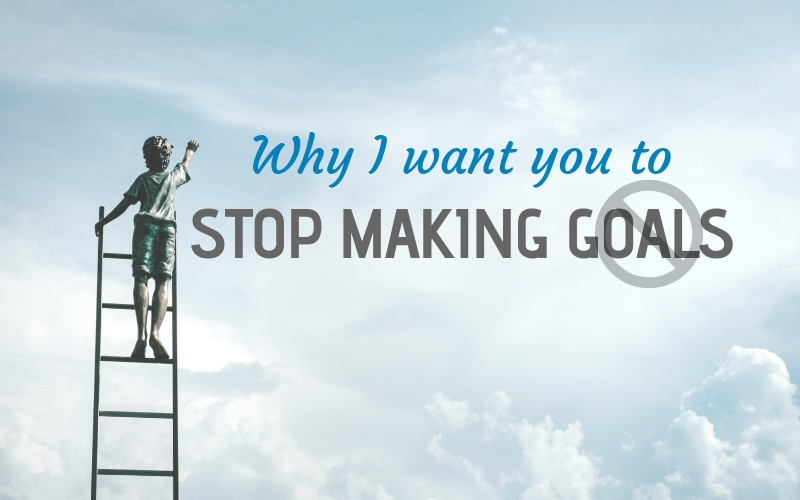 I’m writing this post airborne, somewhere over Greenland, on my way to Delhi. My six week trip to India and then on to Nepal, actually started six months ago, on my 60th birthday.

Before I get to that, let me ask you a question…

Have you ever made a goal – perhaps one so good you couldn’t resist telling others – and then somehow lost the plot?

Sort of like a novel that starts so bravely, but wanders off around page 128—you lost momentum, got discouraged and then gave up altogether.

Of course, it’s not your fault…

Maybe the weight didn’t come off as you’d hoped, clients didn’t buy your stuff, or you didn’t write that book which you thought would change “everything”.

And, like most people, you realised that pushing a boulder uphill isn’t fun after a while.

WE ARE STRANGE CREATURES

We are strange creatures—ambition filtered through self-doubt but more than willing to portray only the best of us to the world. Don’t believe me? Spend 10 minutes on Facebook and tell me what you see.

This week I was speaking with a client about the speech she wanted me to give to her staff. This can be a strangely awkward conversation:

The client wanted some kind of transformation and I stepped into my oh-so-positive role – all the while thinking of the many times, after giving a speech, that I’ve slipped into the back of a taxi feeling like a bandit.

Don’t get me wrong – one speech or workshop can change lives. And I’ve been blessed in my career (it’s hard to call something that requires little to no training, doesn’t show up on any university curriculum, and basically has zero barriers to entry a “career”) to have had many people tell me so.

My client is now at that uncomfortable part where she says something nice about me. “We are really looking forward to having you speak – you have led such an amazing life and done so much!”

I know I walk my dog every morning and take out the garbage on Fridays, but that’s not exactly ticker tape parade material.

And why is it that after all these years of goal-setting and even after making lots of them come true that I can only recall the near misses?

This brings me to training.

WE’VE BEEN TRAINED TO CREATE GOALS

Starting at a young age, we had rooms to keep clean, tests to prepare for, sports to train for – even bank accounts to build.

We soon learned that not much happens without a goal: you want something – you make a goal.

The problem, dear reader, comes shortly after you put down the pen and there, staring back accusingly like an overdue credit card statement, is that freshly minted: “Earn $100,000,” “Travel to Ecuador,” or “Lose 10 lbs.”

My experience (repeatedly) has been that it’s always going to be hard to draw a straight line from desire to achievement.

My experience (repeatedly) has been that it’s always going to be hard to draw a straight line desire from to achievement. Click To Tweet

Blame it on momentary spats of hubris, the economy, competition, Netflix, or your body’s stubborn resistance to change.

But, that’s not the real reason that despite putting an even greater squeeze on them, new goals can slip through your fingers.

THE PROBLEM WITH GOALS

There are at least two problems with goal setting.

First, when you make a goal, like “I will get 2 listings and sell one home every month” you simultaneously set yourself up for both success and failure.

It’s a black and white bargain, based on a single right/wrong outcome.

The act of goal setting, therefore, is one of risk – “will I win, or will I fail again, and feel like even more of a failure?”

Not a great place to start.

Setting a goal ISN’T half the battle

Secondly, we have been led (wrongly) to believe the act of “Shoot for the moon” goal setting is half the battle.

Blame it on Oprah and the positive-thinking movement, but a whole generation of goal-setting devotees emerged out of late-night Tony Robbins commercials.

Blame it on Oprah and the positive-thinking movement, but a whole generation of goal-setting devotees emerged out of late-night Tony Robbins commercials Click To Tweet

The reality, according to psychologist Adam Alter, is that when you set a goal you enter “a failure state where you’re not achieving whatever that goal is. That feels pretty bad to most people.”

And it’s in that space between goal-setting and goal-achievement when the wheels come off and many well-intentioned ambitions end up in the ditch.

FULL OF FAULTS AND NOWHERE TO GO

Here’s a test you can do right now to measure your current goals.

Reader warning: if the just the thought of evaluating your goals scares you off, you have your answer.

I know on many days I would be scratching by in the low 3’s. Not pretty.

That’s why I want you, me, everyone to stop making goals.

Instead, we need to create conditions.

So, on one hand, I want goals because they motivate me and improve my state in life (nothing wrong with wanting to be debt free and vacationing at Cabo.)

On the other hand, new goals set you up for potential failure (still balancing credit card debt and vacationing in your lawn chair.)

That where conditions come in.

When I turned 60 this year I created some lofty goals: solo adventures with each daughter, write a book, work 4 day weeks…that sort of thing. I also had a goal to build a school in Nepal with my family.

As I write this I’m en route to meet my family in Nepal for the school build and then taking my daughters trekking to Everest base camp.

You might be thinking (just like the client I mentioned earlier) I’m some sort of goal-farting machine with a solid track record of happy face stickers.

Ah hem, not quite.

You might be thinking I’m some sort of goal-farting machine with a solid track record of happy face stickers. Ah hem, not quite. Click To Tweet

The reality is the foundation came off the school build project somewhere around June.

I was 2 months into the goal, distracted by other projects (including another non-profit) and had only raised about one-third of the money.

The dark fog of goal-failure deja vu started to roll in.

And so did failure justification: “Yeah, but I’ve had a lot of distractions…” and “After all, one-third is better than nothing.”

Here’s my insight. It’s not that the goal was faulty—my goal setting was faulty.

Instead of a do, or die, yes/no equation, I needed a new condition in my life.

Instead of a do, or die, yes/no equation, I needed a new condition in my life. Click To Tweet

At the risk of overstating this, I believe the conditions you choose in your life and more particularly with your goals, is the game changer you might have been looking for.

Here’s how it works…

Condition – to bring something into a desired state of use.

I’m not saying being debt free or losing 10lbs are not worthy objectives – they are.

What I am suggesting is you will be more successful if your new goal leads to a new condition—a new way of showing up.

What matters is you lived your life in a way that is congruent with that person who sat down one morning and committed to losing 10lbs or getting out of debt.

If you want to achieve anything of value in your life you need to close the door on a lottery mentality. Stop making goals and make room for a new way of showing up.

If you want to achieve anything of value in your life you need to close the door on a lottery mentality and made room for a new way of showing up. Click To Tweet

The difference is obvious:

A first-time author desperately clinging their first book goal struggles with everything to do with writing, including getting words on paper. It’s difficult to keep listening to their excuses.

A first-time author who has moved beyond goals to changing their state shows up like an author. They’ve adopted a writing schedule, they use “I am” statements, and their conviction is infectious.

Here are examples of how I stopped making goals and turned them into conditions:

A NEW CONDITION AND DAL BHAT

Around July this year, I was beating myself for wimping out on the Nepal project. I needed to change my Window.

I asked myself “What am I doing this for?” The immediate answer was “I’m doing it because that’s what I do – I give back.” It’s a condition in my life.

A goal is a yes/no, made it/didn’t make it proposition.

Like going to the casino with $100 – you either walk out with more money, or you lost.

My condition is “I am a leader who makes good things happen.” Writing a cheque to build a school in Nepal was an option. It would have made for a pretty expensive birthday, but it was an option.

But that’s not the condition I live by.

As a leader doing good, I want to bring others along with me. I want to share the journey so we all can benefit.

The strange reality is that people were wanting to help – eager to help. My state didn’t allow it to happen.

When we complete our school build, the final act is to place named bricks on the face of the school – one brick for every donor. I will be placing 72 bricks on “Eleanor House” (named after my dear mother who, if she had lived just 12 more months would have been 100 this year). And it all happened when I created a condition in my life.

As soon as I started to show up not with a goal, but with a state of being, everything changed. Doors that looked closed were open. Opportunities I hadn’t seen became obvious. And reaching my goal of 4 classrooms became simply something I was doing.

It was my condition. I was my state of being.

I know you have dreams and goals – tell me what are the conditions you need to live by?