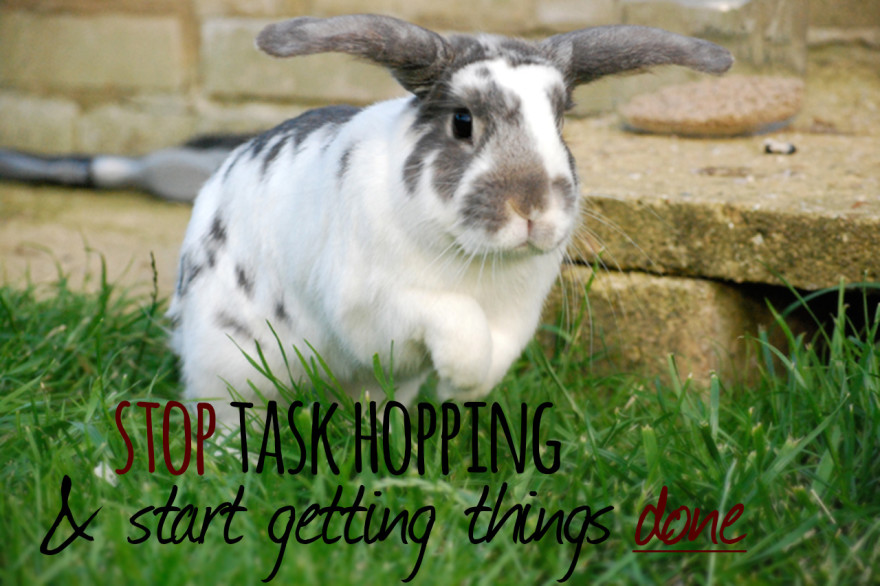 I teach productivity. I don’t like to call it that. It’s the same with most motivational speakers. They prefer to say they talk on “leadership”, or “personal mastery”, but really it’s motivation. For me, it’s productivity.

And one trick has been trumping all the rest lately. I think it’s a game changer.

Some research (don’t ask me where I found this gem) claims that task hopping can cost you a loss of 25% of productivity.

This is one of my weaknesses. I get off a phone call, move on to some new task, and then another and then, hours later (sometimes days later), realize I haven’t recorded what I committed to working on. I did that just yesterday after an important client call. Scary!

The solution to task hopping is pretty simple: stop doing it. Good luck with that.

The actual approach I use always starts with noticing. Call it benchmarking, current reality check-in, or just a good laugh, noticing your behaviour and patterns is where you have to start.

Pick just a couple of hours, say tomorrow morning. And notice when you leave a half-finished task to hop to another. I think you’ll be surprised how frequently this happens.

Here’s what I bet you’ll notice:

Following Charles Duhigg’s four-step recipe (The Power of Habit) for changing a habit, we (1) identified the “cue” (I task hop when I have tough work to do), (2) recognized the reward (ex-lax for my brain).

The next step is relatively easy. At the moment of temptation, stop.

There is a moment when you consciously allow yourself to be tempted. A thought will flit through your frontal lobe of the cerebral cortex that says something like “Oh, that’s interesting…” At that point you need to recognize what’s happening.

You are going down a slippery slope (cue, reward) that will steal ten minutes from the more-important work and leave you feeling distracted, frustrated, and even a bit guilty. Not good.

The trick is to catch yourself. Say “No, thanks”, make a note and turn your head back to what you are doing.

I did that this morning.

I was working on this blog (which has to be finished today) and here’s what got my attention:

And that was all in five minutes!

The new routine, is I say “No, thanks”, make a quick note on my Day List and turn back to the blog. Easy peasy – less stress and better results.

Here’s the kicker. Nothing happens without a reward.

Once you commit to the new “No, thanks”, make a note routine you need to reward it. The simplest reward is completion. As I write this I am about 10 minutes away from shipping this blog. That feels great.

Start your task with a reward in mind and then use that as your tease to keep returning to the work. Here are some other rewards I use:

Your reward doesn’t have to always be a big deal – it just has to be bigger than the reward that the task hopping would have given you.

When I’m on stage talking about productivity I can’t go into this much detail. But here I have the chance to drill down a bit deeper. But, here’s the thing.

Although what I’m writing about is minor, compared to say, China landing on the moon. It’s huge over time. If you task hop throughout the day, each time you could be distracting yourself for, say five minutes. Let’s suppose this happens 20 times a day. Okay, now you are at 100 minutes, or about 10 weeks a year (10 minutes/day equals about one week a year, based on a 40 hour workweek and working 50 weeks a year). Cripes! I hope that’s enough motivation to spend a few minutes just noticing.

I’m sorry that this isn’t about some cool app that sorts To-Do’s or sends evil emails to people that forget appointments. I’ll try harder.

The good news is that this one change will change your life. Promise.