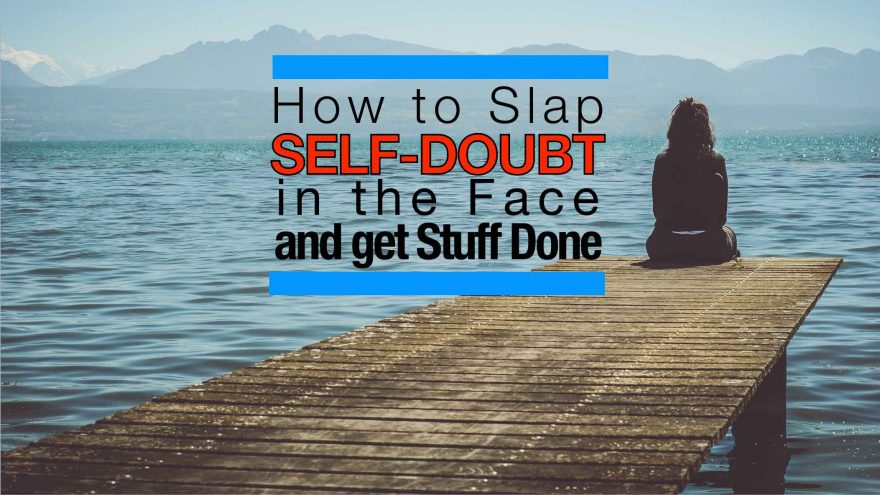 I just got off the phone with a student in my BOSS program. She needed tough love.

She was running around in cerebral circles thinking of all the things she should be doing, could be doing, to move her speaking business forward and then – just as quickly – coming up with reasons why they wouldn’t work.

It was like debating her alter-ego. Good luck with that.

Sure, healthy doubt is a good thing.

We SHOULD be questioning that start-up investment or taking up kite surfing in your 50’s. Those doubts are good.

But, doubting your VALUE, or ability to get stuff done. Not good.

Here’s a quick test to assess your self-doubt:

How many of these have you done in the last 30 days?

Fun: Thought of something fun you could do, but just as quickly talked yourself out of it.

Work: Avoided a tough conversation because you doubted yourself.

Life: Read about someone’s “amazing” life and came up with reasons why you’re different.

Achievement: Admired someone’s clothes, car, house, spouse and thought they were somehow “better” than you.

How many have you done? I’ve done all 4 (how do you think I came up with the list?).

Doubt is healthy. It’s like fear of heights or taste buds – they keep us safe. But if you’re frustrated thinking life is passing you by, you need a show-down with doubt and to pull your pistol first.

Start with what you want.

The average person has 83 things on their To-Do list (I made that up) – that’s a lot of junk cluttering up your mental math—you need to have One Thing.

In their book The One Thing, Gary Keller and Jay Papasan ask a deadly question “What’s the One Thing you can do this week such that by doing it everything else would be easier or unnecessary?”

Do you get that?

The challenge they are making is for you to drill down through layers and layers of time-sucking drivel to get to One Thing that moves the needle. Get it done, and then go for the next one. And not just any One Thing – it’s the One Thing that makes other things better.

But, first you have to do one other thing first. Stop doing meaningless crap.

You know what I mean: the stuff that fills your minutes and, by the end of the day, you have no idea what you did to fill your minutes. Like checking email every 7 minutes, shuffling paper, rewriting lists, checking Facebook and deciding between a colon and semi-colon on a report most people nobody will read.

There’s lots of ways to do that: in this post I explain how I block time. In this post I share 4 ways to reduce overwhelm and get your To-Do’s back in control.

Once you’re willing to get focusses, it’s time for the fun part – learn by doing.

When it comes to procrastination, there’s a debilitatingly vicious cycle that goes like this:

Monday “Call Sherry and give feedback about her work”

“It could be ugly – after all we have history.” (tiny voice: ‘I hate conflict’)

“I’ll do it tomorrow when I’m fresh.”

Nothing happens except you become more entrenched in unhelpful negativity. It’s like watching Braveheart over and over and thinking it will end well for William Wallace (it doesn’t.)

The antidote for self-doubt is to do something – anything.

Sure, you might have bigger jobs you’ve been putting off like a Tiger you need to face or finishing that book proposal or asking for a raise. Life has no end of mountains we need to climb.

Our job is to slap self-doubt in the face, get focussed on One Thing that will get us closer to the summit and always take that next step.

What’s the One Thing you can do this week such that by doing it everything else would be easier or unnecessary?