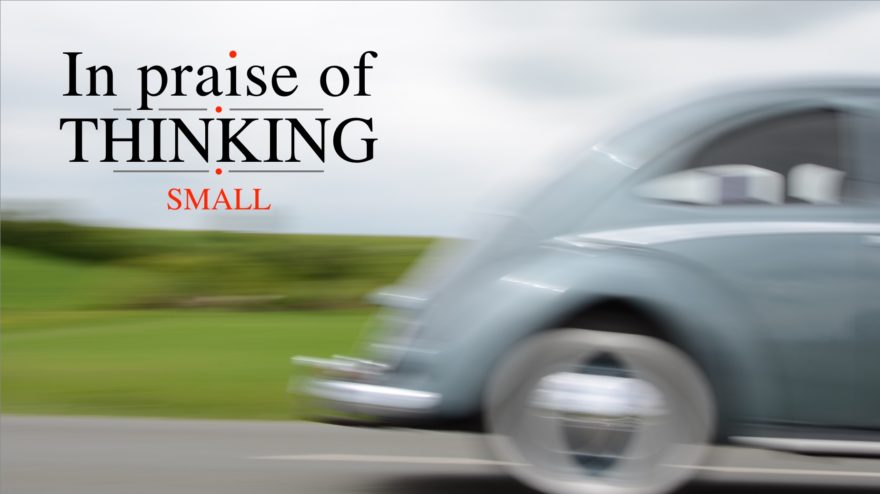 I’m sorry, Houston, but we have a problem.

Of all the weird wiring society has dumped on us, Go Big or Go Home is the most twisted. And it’s everywhere.

And the media loves Go Big celebrities. Like Jim Carry, who wrote a cheque to himself for $10 million and carried it around until the day he could afford to cash it.

Or Elizabeth Gilbert’s rise from obscurity to Oprah-Sanctioned celebrity and joining Time magazine’s list of 100 most influential people in the world.

The list goes on, with the likes of: Steve Jobs, Travis Kalanick (Uber), Elon Musk (Tesla), Brian Chesky (AirBNB) and J.K. Rowling. No small thinkers among them.

There’s only one problem. Go Big presumes there’s something wrong with Go Small.

When I was a hard-core whitewater paddler, living in North Vancouver, Walter’s Ski Shack was where we went for boat repairs and a little unsolicited philosophy. “Don’t be crazy!” Walter Buchmuller would grumble in his deep Swiss accent “The water will be there tomorrow.”

Stepping into the dimly-lit store (complete with tiny Swiss bells on the door that jingled as you entered) you were assaulted by the stench of open cans of resin that seems to permeate everything. No bigger than your typical shoe store – walls were stacked to the rafters with kayaks, paddles, skis, poles and life jackets. At Walter’s there were no seasons—everything was on sale, year-round.

And then there was Walter.

Short, stocky, typically unshaven and no-nonsense, Walter was quick to chastise you for abusing your equipment and just as quick to wave a hand and tell you there was no charge. I’d drop by even if I hadn’t smashed my kayak or needed more ski wax.

Walter’s was a safe haven to get repairs, have a friendly conversation and feel welcomed—it worked by going small.

In Small Giants – Companies that choose to be great instead of big, author Bo Burlingham took a distinctly non-good-to-great approach by examining and celebrating the success of small business. As he described them: “Most are growing, often in unconventional ways, but several have chosen not to grow at all, and a few have made conscious decisions to scale back their operations.”

Small Giants is a refreshing read if you have a small baby of your own and wondering how much to feed it.

“There are thousands of private companies that don’t grow much, if at all;” writes Burlingham, “and they don’t die either. On the contrary, they’re often quite healthy.”

I make a great income, and…

As we approach year end, I’m looking at my plans and questioning my motivations. I have three parts to my small business: speaking, coaching speakers (mostly through my BOSS 8-week training program and at any given time I’m coaching a few brave souls) and BlogWorks. I make a great income, run the whole operation with a small team and and equally small office. I can take off two months a year and most months I could be doing my work from a beach on Maui or café in Portland. Small is working for me.

Could you redirect your efforts to increase volume and grow your business into higher-touch service?

When I created the BOSS program I included one-on-one coaching before and after the 8-weeks of video lessons and live calls. This year it was a ton of work to schedule almost 90 people (from 9 countries) into two 30 minute calls, but the rewards made that decision a no-brainer. I’m convinced those calls are a big part of the reason we fill 30% of our seats before we even advertise.

Staying small and getting better is not going to make headlines or win business-of-the-year awards but it could build a more valuable business – one that gets better results and you can be proud of.