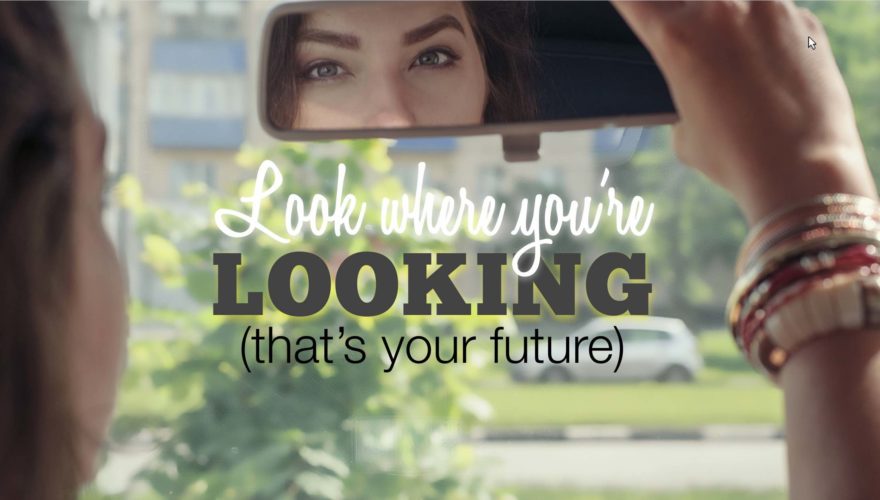 In the United States there’s a weird statistic about driving accidents that’s a bit frightening, but actually very instructive.

Of all vehicle related fatalities, one in five resulted from the driver hitting a lone tree or telephone pole – six inches to either side and they might have walked away.

Now before you start thinking it’s a conspiracy against Ma Bell and the cost of telephone service, the reason someone would aim directly at a telephone pole, when they could have missed it by a “country mile”, is actually all about “Target Fixation”.

And Target Fixation affects everything in your life.

Target fixation happens when you become so focused on what you want to avoid you actually increase the likelihood of getting more of it – like a telephone pole on an empty highway.

You can trace this mental-phenomenon back to your pre-historic ancestors: Bob and Mary.

Way back in the time of Tyrannosaurs, there was Bob and Mary (not their real names).

**Warning: based on reader feedback I feel compelled to clarify, dear reader, that humans and dinosaurs didn’t actually soil our planet at the same time. According to Mr. Wiki, dinosaurs buggered off around 66 million years ago and we popped up about 2 million years ago. Still, I think it’s a funny image, so I’m leaving it in (it’s my blog.)…back to the blog.

When Bob and Mary were hungry (which was most of the time), they didn’t whip out their iPad and order Chinese take-out. No sir.

If something was shuffling around in the bushes and looked smaller than a refrigerator, away Bob and Mary scurried, spear in hand, to collect their next meal.

But if there was a dust cloud on the horizon and the sound of rumbling hoofs, well that’s when Bob and Mary stepped out of harm’s way and chatted about the latest pictographs on the cave wall.

We have that same ancient mental wiring.

Something looks safe? we step in. Looks dangerous? We step back.

It’s binary, black and white and a super simple way of interpreting our world. It works like this:

One of the first lessons wannabe race car drivers are taught (so I’ve been told) is to look to where you want the car to go – not at what you want to avoid. And that’s exactly how you break the hold of your ancient mental wiring.

The first lesson of car racing is to look where you want the car to go - not at what you want to avoid. Click To Tweet

Look where you want to go

I easily fall into a negative tail spin. As I write this, it’s overcast, cold and drizzling outside. After another brilliant, hot summer in the Okanagan valley (as many sunshine hours as Hawaii, if you’re asking), I’m not ready for cold.

Right away I’m thinking: my morning walk with Riley (he won’t notice if I cut it short), the ride to my office (maybe I’ll take the car), my training paddle later today (maybe I’ll skip it).

And on it goes: a negative tail spin.

To break it I have to focus on where I want to go. And I do that by asking a better question.

Instead of asking why is the weather crappy, I need to ask a new, better question that promotes better thinking (Bob and Mary were too busy reading trashy romances to ever figure this out).

I wrote more about how to do this and Martin Seligman’s model for learned optimism in this blog post.

When you recognize the downward spiral of stuck thinking the easiest thing to do is give in to your ancient mental wiring and start noticing evidence that proves you’re right.

She’s evil, mean, and selfish? There she goes ignoring me. Again.

The trick is to notice stuck thinking, recognize how useless it is, and ask a better question, like this:

Making sales calls sucks? When was a time when calling people was a great experience?

She’s evil, mean, and selfish? I wonder what I don’t know about her?

I don’t have time to take better care of myself. What could I do in just 15 minutes that makes me feel healthier and gives me energy?

Ready to make a big change? Pick a challenge and ask a better question. And then explore that new, more curious, outlook.

It’s not about being right. It simply about having new options and seeing what road they take you down.