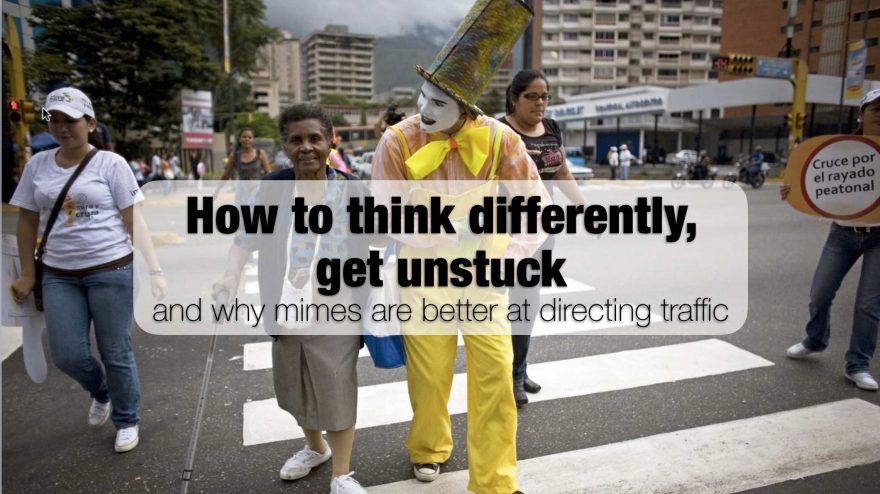 When Bogotá’s newly minted mayor, Antanas Mockus, took office he had a lot of problems.

One of which was traffic.

In a city of 8 million, where a large majority of the population walk to work and to shops, pedestrian accidents were at an all-time high.

True to his somewhat eccentric nature (as a professor, Mockus would sometimes show up in a spandex superhero costume) he replaced the traffic police with mimes – 420 of them.

The theory was instead of punishing pedestrians with threats and penalties, the mimes would follow and shame jaywalkers, mock poor drivers, dramatize the frustration of citizens moving through traffic and wildly celebrate good behaviour.

Pedestrians and drivers loved it.

Within 2 months, pedestrian traffic compliance increased from 26% to 75%, gridlock was dramatically reduced and, over a longer period, traffic fatalities fell by 50%.

By using humour, instead of penalties, Mockus had done something the previous system with traffic cops had failed to do – create a lasting solution.

Mockus didn’t stop there. He celebrated women by orchestrating a “Night for Women” that attracted 700,000 women to enjoy a safe night out while the men were instructed to stay home and take care of the children.

He went on public TV during a water shortage to demonstrate (live from the shower) how to turn the water off while you soaped. With the addition of economic incentives, water use dropped by 40%.

And, for one campaign, he asked citizens to exercise their power by handing out 350,000 “thumbs up” and “thumbs down” cards that could be used to peacefully approve or disapprove of other citizen’s behaviour.

You aren’t the mayor of Bogotá but you do have one thing in common with Mockus – you have problems to solve.

The problem with problem-solving is we only see one version. Our version. But it’s worse than that:

In psychology they call it confirmation bias – basically we think we’re right.

I was on the phone an hour ago with a client who was complaining that he’s always so distracted he can’t manage to publish his blog on a regular basis. He’s right – he is always distracted. And there’s a good chance that he always will be.

A friend struggles to make enough money as a speaker. He tells me there “just isn’t enough work out there.” Right again, there isn’t enough there (for him) and there’s a good chance there won’t be in the future.

“I wouldn’t see it” the philosopher and media critic Marshall McLuhan once wrote, “if I didn’t believe it to be true.”

For you, it might be time for your kids, time for exercise, feeling happy, or just getting a good night’s sleep. Whatever it is that seems to be evading you, your first job is to admit whatever you’re doing AIN’T WORKING.

Whatever it is that seems to be evading you, your first job is to admit whatever you’re doing AIN’T WORKING. Click To Tweet

The next step is to get out of your own way and invite in thinking differently.

5 simple steps to getting an abundance mindset

Why I am quitting stupid, petty, small thinking

You already have what you need (money, time, health and sex)

If those posts don’t put a big enough dent in your neuro-plating, here are steps I use when I’m stuck in a downward cerebral-loop.

Stand on your head.

Everything looks different when you take a different approach. A restaurant that looks wonderfully inviting from the street can look disgusting and downright scary from the rear. And your problem can look completely different if you ask a “What if?” question. It can sound like this: “What if I was already successful at this, looking back what made that happen?”

Nothing breaks the mental fog like a brisk walk outside. Even better, pose a question you need to answer before you finish your walk. A powerful question Gary Keller asks in The One Thing is: “What is one thing I can do such that by doing it everything else will be easier or unnecessary?” (there’s enough packed into that for a full marathon).

Your brain has an amazing capacity for backroom processing. If you let it. Hammering away on the same problem (“Why do I always overcommit myself!?!”) is not going to help. Instead, walk away…but before you do, turn your “Why do I always…?” question into one that at least has a chance of pointing to some positive solution, like “What’s one thing I can do every day that I know is not a big commitment, but would give me progress?”

It would be a beautiful thing if we all had the insight to replace traffic cops with mimes, or let people give thanks with a thumbs up card.

You and I can use that inspiration as a reminder we all have the capacity to think differently and to act on what really matters.

After all, it’s our life.