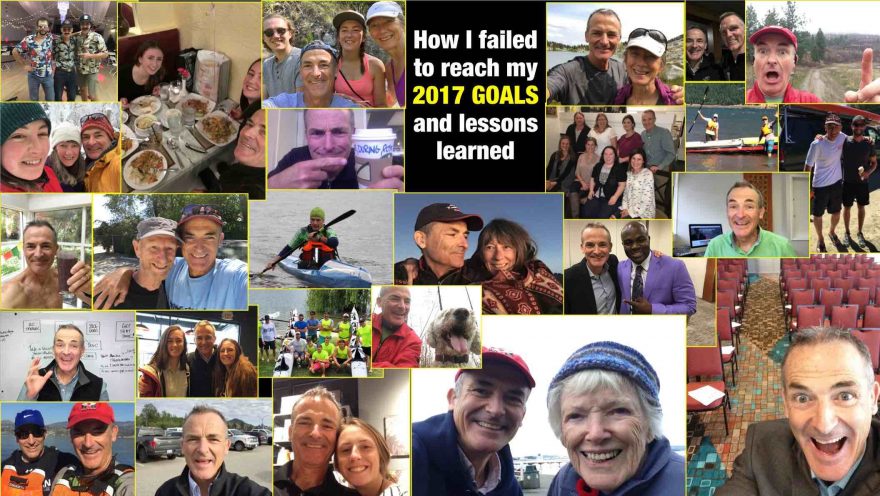 I struggle writing goals for the year. Don’t get me wrong – I’m all over project goals and making my Flight Plan for the week. But sitting down to write goals for the year makes my palms sweat and always feels like a blind dart toss.

And the only thing worse than writing goals for the year is to look at the results.

If you’re anything like me, you probably prefer to just move on and write new ones.

This year I want things to be different. It’s my 61st year on this spinning orb and I want to make it my best year ever (and I don’t write that to be clever.)

So….in the spirit of full transparency (feel free to feel smug at my failures) I’ve decided to share my review of my 2017 goals.

This became a threshold year for my family—my Mom passed in April. And even though she was just 4 days from her 99th birthday it was still felt like a surprise. Right to the end, she was living in her own house (thanks to the incredible care given my my sister Sue), enjoying gardening, reading romance novels and increasingly slower walks around the neighbourhood pond.

– 3 big adventures, one for each daughter and one with my wife.

When my girls were a lot younger I would create separate adventures for them. My oldest daughter loves the mountains, so we hiked. My younger daughter and I explored coastal waters in sea kayaks.

In 2017, my time away with my two girls (both live away from us, in Victoria, BC) was packed into lots of short visits. I was grateful for the small bites of ‘us’ time, but somehow they felt like appetizers when what I wanted was the entrée.

Kirsten and I got away somewhere hot for two weeks and that was much needed medicine.

Grade: I’d give myself an B+. My Mom brought us all together one last time in a beautiful way that felt surprisingly natural, but I sorely missed the long trips with my girls.

My goals for time away from work for were disappointingly vague and correspondingly failures:

I had loads of mini adventures (in July I spent a week paddling the rapids in the Gorge at Hood River, Oregon culminating with Gorge Downwind Championships), but no big adventure. I also didn’t unplug enough.

Grade: C+. To get an A I need to be unplugged for at least 5 days at a time and more often. I can afford it, I just struggle to do it.

This is not an area I struggle with. In fact, my goal is the same every year: average one hour a day, seven days a week.

Most of my exercise is high intensity training running, cycling, paddling, XC skiing, yoga and gym. I competed in 6 endurance paddling races (I race surf skis and outrigger canoes), came second in two races, including the Canadian Outrigger Championships (with a very surprised partner) and survived the rest.

I also experimented with a slow carb diet for four months; living mostly on a diet of spinach, beans and salads. It was a small and a bit surprising bonus to see my abs reappear after 20 years of hiding. They’ve since gone back into hiding.

Grade: A-. I’m more aware that my body doesn’t just ‘bounce back’ after hard workouts. And I’m becoming increasingly aware that boringly common activities (like standing up after an hour of writing) have become a bit of an adventure.

My 2017 writing goals were pretty specific:

I failed at both.

I did crank out 39 blog posts (I don’t know where the other 13 went). And although my blog traffic did climb steadily, but didn’t get much past 10,000 readers/month.

A second book wasn’t really contemplated until the Fall, so I don’t blame myself for little progress in that department.

A truck load of time and energy (including many nights lying awake) went into overcoming some pretty stuck sales numbers. The first 10 months got aggravatingly slow results with lots of money being spent. It wasn’t until I put all my attention into improving one sales funnel that sales (finally) took off. In December we clocked more sales (we had 3 hat trick days) than the entire year.

Grade: C. There are so many moving parts to BlogWorks: the team (now eight of us), on-boarding new clients, sales funnel, etc. My failing grade is for farting around with bright shiny tactics that didn’t work. My bad.

I was pretty specific about my speaking goals, but it was also easy—those goals don’t change:

In that sense, I’m being a boring, lazy fart. I can usually book that goal on the calendar by mid-April. My excuse for not pushing harder is that it distracts from SOS and other projects. The reality is it’s a lot of work.

Grade: B+ (for consistency, not effort).

I put together the 3rd year of the Business Of Speaking School (BOSS17) training and coaching program. It was another successful year with 45 students. My goal was 100, and I was painfully reminded that unfounded, throw-a-dart-at-the-wall goals, are hopelessly flawed before they leave the gate.

I made very little effort to boost sales and we had about 1/2 the number of students from the previous year. I did add a coaching option, which went a long way to making up the income.

The Business Of Speaking Community meets online twice a month and always makes me smile. It’s a small group, but I feel it’s making a difference and I want to see it grow. Thank you for all the cups of tea we shared.

Grade: B-. I would grade myself higher for quality of output, but I was too distracted to do a proper launch for BOSS17.

Some, more attentive, readers might recall I announced my “retirement” some 1,400 days ago. That post got a lot of attention and raised some uncomfortable questions. So, before you start calling me on it in the comments (which I welcome regardless), here’s what I meant by “retire.”

My work/money goal for my 60th birthday was to be financially secure (I can shut it all down without a worry) and to wake up everyday able to work on exactly what I want to work on. I still work hard, but completely on my terms.

Okay, so now the “review” is over and I have my report card, I face the task of goal setting for this year, my 61st year (WTF!). I won’t bore you with the minutiae, instead, here are the broad strokes:

This post took a long time to put together. Not because I didn’t know what my goals were, but because I still feel nervous about sharing “behind the curtain.”

I want you to have your best year ever. And I don’t mean that in some pie-in-the-sky, motivational BS way. I’m talking about working hard to get what you want and deserve. We’re all going to have near misses and complete out and out what-the-hell failures.

But, let’s at least stick our neck out and go for what we want. Even if it’s scary.

Tell me in the comments: what’s one big scary goal you have (I’ll write you back).

Before we go – please share this article. There are some 10,000 of you that read my posts every month and there are many more I want to reach. If you found this worthwhile, please click on the social buttons to your left (or the bottom of your mobile screen) and let people know. Thank you.

Why your smart goals will fail! (unless you do this one thing)
What I learned from my wins, screw-ups, and relationships (plus one wish for you)
Why I am quitting stupid, petty, small thinking

Photo by Andrew Preble on Unsplash