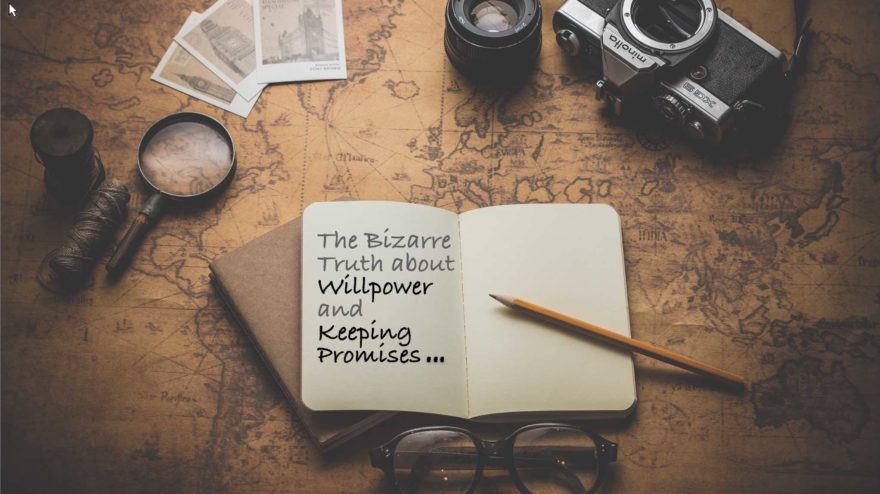 In a research facility near Sydney, Australia, 2 dozen people sipped coffee and listened carefully to their instructions. They were about to commit to a new exercise routine. In fact, it was much bigger than that.

The plan was for each person to commit to going to the gym 3 times a week for the next 2 months. This wasn’t about gruelling spartan warrior exercises – just simple routines designed for the kind of person who thinks using the stairs is showing off.

In fact, they were all self-confessed coach potatoes.

But that’s not the interesting part. Sure, they did their exercises and their fitness improved – as it would for anyone, whether they walked more or went to the gym.

What was fascinating – even surprising – was after just 2 months every person had made other healthy changes. They smoked fewer cigarettes, drank less alcohol, ate less junk food, watched less TV and even had fewer arguments.

How is this possible?

It turns out that keeping promises is fuel for willpower – the more you keep the more willpower you can apply to other decisions, like smoking, drinking and watching TV. I wrote more about building willpower in this post.

In a second experiment 30 people were taught how to set monthly spending goals. This included recording what they spent on luxuries (restaurants, movies, etc) and keeping daily logs of spending.

I’ve done this exercise – it’s uncomfortably revealing. In fact, after two weeks of tallying up every chocolate bar and cup of espresso, I decided to quit drinking coffee (I describe what happened since in this post).

Just like with the exercise experiment, finances improved – people spent less on impulse items and even managed to save more. But, again, there was the bigger effect. Without exception, people smoked less, consumed less alcohol, less caffeine, had fewer arguments and ate less junk food.

As Dartmouth researcher Todd Heatherton puts it: “Once you’ve gotten into that willpower groove, your brain is practiced at helping you focus on a goal.”

And we’ve been conditioned to tackle problems head on.

Want to lose weight? Off we go buying a gym pass, dieting, and walking during lunch.

Want better relationships? We commit to listening openly, praising more often and facing the Tigers in our life.

All good stuff, but if you haven’t built the willpower, adding more promises won’t help.

What you need to do is trick your brain to keep your new promise.

I pick up garbage.

It started 17 years ago, I was training for my first Ironman competition, when someone suggested if I’m going to be on the road running as much as I needed to, I might as well pick up garbage.

What started with pop cans and random plastic bags turned into a habit I’ve kept ever since. Am I rocking the world by picking up a handful of garbage? No, but I am developing willpower.

In effect, I’ve tricked my brain. Here’s some habits I have added and kept:

Now before you start thinking I’m some sort of purist in pursuit of a monastic life. I’m not.

I can happily celebrate the end of a week with a bowl of Breyer’s Heavenly Hash or quaff the occasional Bounty bar.

But I do love the feeling of keeping a promise—if nothing else goes right, today I kept a promise.

You don’t need to start with what you want. Sounds strange, but stick with me here.

The knee-jerk reaction to getting what you want is to put more attention on the problem. Yes, that needs to happen.

But equally important is to build your willpower to succeed.

The question is: what is a small commitment (Stanford prof BJ Fogg calls them “Tiny Wins) you can make and keep?

It might be 3 sales calls before 10AM, no salt on your meal, or making your bed every morning. Each routine builds the muscle we call willpower. And stronger willpower is what lets us enjoy the big change we’re after.

I could write more about this, but I have to go pick up some more garbage.