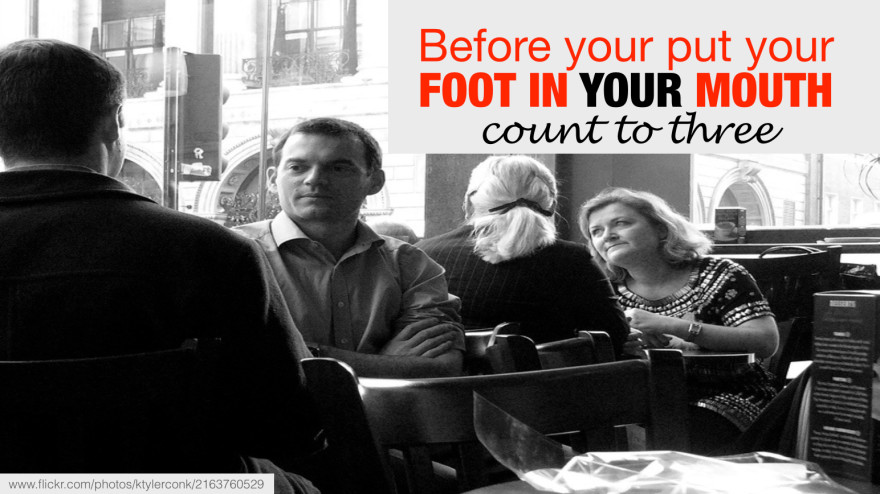 We’ve all done it: said something we regret. Maybe you were with a client, a friend, your wife/husband/partner, even your child. It’s embarrassing, even damaging. Here’s what happened this week.

We were rushing to pick up our oldest daughter at the airport. She was flying home from a two-week backpacking trip of Europe and we were anxious to get to the airport on time.

An hour before I had checked my phone to see if her flight had arrived in Vancouver for the final leg of her trip back to Kelowna. It had. Now, just as we were rushing to get out the door, I was back on-line trying to see if it had left Vancouver. I couldn’t find the flight.

My wife, was getting irritated. “Can’t you find it?” she called out.

Before I knew it, she was on her computer looking up the flight.

In an instant I was a child again and Dad had taken the hammer out of my hand.

And that’s when it came out.

“You know, control freaks don’t always get what they want.”

It was a quiet drive to the airport.

WHY WE FEEL THE NEED TO SPEAK

When we feel attacked our sympathetic nervous system goes into flight-or-flight response (see “My Freak-out and 5 lessons learned” for more on this). The common analogy is that our autonomic response was critical for survival when our primitive ancestors were hunting on the Serengeti 150,000 years ago.

Your heart rate goes up, taps for Adrenalin and Cortisol are opened (for energy and glucose), pupils dilate, muscles tense, and to conserve energy the brain is put on rations. You are ready for war. That’s all about external threat.

The only problem is you’re not on the Serengeti, there’s no sabre-tooth tiger, and it’s your wife your talking to. “Our body is perfectly designed,” wrote Peter Hanson, in the Joy of Stress, “but for the wrong war.”

That’s usually when I say something stupid.

HOW PAUSE AND COUNT TO THREE WORKS

You want to say the right thing, not hurt the other person, make things better, but your body is tensing up for a fight. Your internal wiring is pushing you to a potentially bad decision.

By pausing and counting to three, you allow time to switch from an external threat to perception of an internal conflict.

This allows your decision-making mind (the prefrontal cortex) time to over ride the adrenalin-fueled body that wants to lash out with a right hook.

Suzanne Segerstron, a psychologist from the University of Kentucky, calls this “Pause and Plan”. When you pause and plan, it “…sets into motion a coordinated set of changes in the brain and body that help you resist temptation and override the self-destructive urges.” (The Willpower Instinct, Kelly McGonigal)

In short, you buy some time.

WHEN YOU CAN USE THIS

We’ve all been in conversations when we get defensive, anxious – even mad. That’s when pausing and counting to three can save your bacon. Here are some situations to try it out:

The simple habit of pausing and counting to three might sound like something we learnt in kindergarten. But, often those lessons serve us well as adults. Especially, when you care that what you say is good for everyone.

What about you? When do you need to pause and count to three? Let me know in the comments below – I want to know!