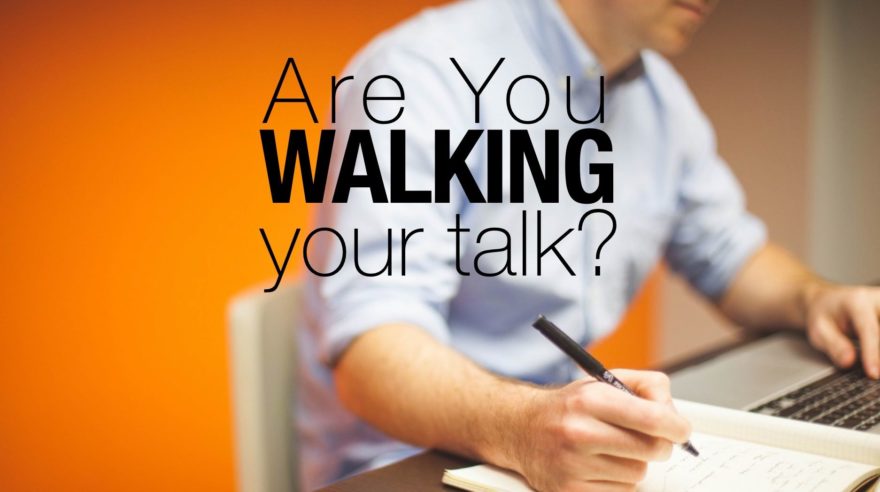 Nothing new there – deceit’s been with us for as long as we’ve been bumbling along on this rock.

But, what about promises you make with yourself?

Are you walking your talk?

Deceit’s been with us for as long as we’ve been bumbling along on this rock. Click To Tweet

When I started teaching leadership skills, I didn’t know much about teaching but I knew a lot about leadership. My previous companies had lots of staff and I’d been consulting to large organizations. So I took my experiences as a leader and consultant and augmented it with the best practices de jour from best-selling authors.

Voila! I got hired and paid a pretty penny.

All was great, except for that nagging voice…

Sure, my advice was solid. But was I using it?

You claim to never miss your morning run, meditation, writing, reading ritual. But, you do.

You pride yourself in being a committed parent (in fact you brag about it), but you know that’s not always true.

You promise yourself this year will be different: this is the year you’ll eat better, exercise more, get off Facebook, and save money. But, you don’t.

It’s not that we’re bad people (well, that’s not always true), or deceitful, or liars. It’s just we can get away with little lies – so we do.

My friend Linda Edgecombe says we all have grand ambitions, but then we “’Should’ all over ourselves.”

And there’s a cost.

It feels inauthentic to give advice to employees if you’re not using it.

It feels hollow to cheer your child with a “Give it your best!”, when you often don’t give your best.

And it wears you down knowing what to do, but still not doing it.

When I’m feeling strong, I ask myself some tough questions.

Are you walking your talk?

Here are questions I ask myself:

There’s an old story I sometimes tell, about leadership and who goes first.

A woman is worried her son eats too much sugar, so she travels with the boy to see her mentor, Gandhi. It takes two days to finally reach Gandhi’s ashram.

After waiting in line, she meets with Gandhi and he listens to her story and then asks her to return in two weeks. Confused, but dutiful, the mother takes her son home and returns two weeks later and again waits in line to see Gandhi.

“Gandhi, Gandhi” the mother pleads, “My son eats too much sugar. Can you help?” Gandhi pauses and then turns to the boy and says “Boy, stop eating sugar.”

“Thank you Bapu,” the mother says, “But why did I have to go away and return two weeks later?”

“Because” says Gandhi, “First I needed to stop eating sugar.”

What do you need to do to walk your talk?