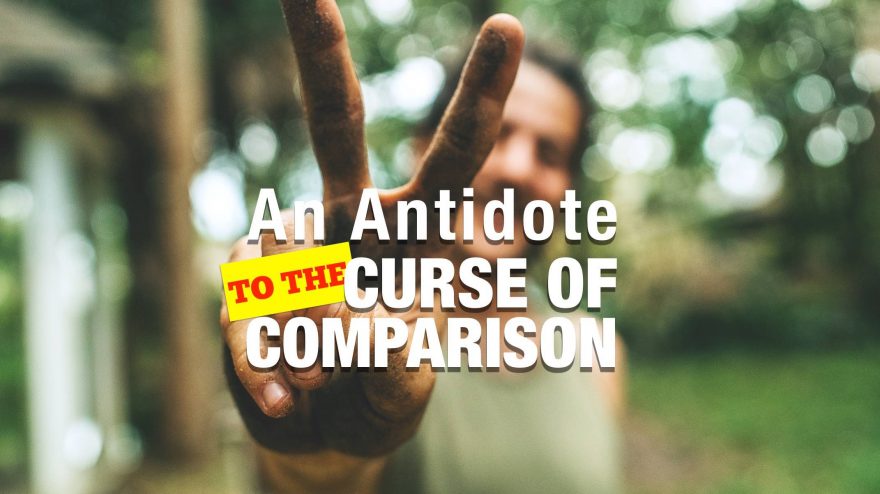 Do you suffer the curse of comparison?

If so, it might be you know too much.

You see, in bygone days news traveled slowly – a week could go by with nothing more than local neighbourly chatter. No longer.

News is instant, inescapable and dumping on you so fast you can’t hope to dig your way out. And with it comes a never-ending purée of opportunities to compare your life to the thousands who seem to be doing better than you.

Just head over to FarceBook or Gaggle and within minutes you can feed your insecurities with no end of exotic trips, expensive meals and grinning selfies from people who never seem to worry (or work).

How about your relationships, hairstyle, clothes or money in the bank? Yup, FarceBook is there 24/7 to deliver (for free!) example after example of smiling folks who clearly are acing it.

In fact, I’m so adept at conjuring up the curse of comparison, I don’t have to go online.

It happens when I sit down to write, step on stage to speak, walk into the gym, or lead a staff meeting. I just dive into that comparison pie and take a big bite of insecurity.

In those moments, there’s really only one thing you can do.

Fake it till you make it

Seven years ago I called a printer’s rep and got a quote on printing 3,000 paperback books. After 2 years of talking about it, I decided if I was going to be an author, I should act like one.

And I know real authors map out what happens after they finish writing their book, long before the book is finished. So I called for a quote.

I also suspected real authors wouldn’t sit around waiting for something like a printer’s quote—they’d start writing.

So I did that as well.

A month later I had a book.

Since then I’ve sold over 10,000 books, Give me a Break has been downloaded some 60,000 times online, I’ve been hired dozens of times because of that book and I’ve made a nice income from it.

In the world of book publishing, my contribution was microscopic; for me, getting that book written, published and sold changed everything.

A step in the right direction

When we take a step toward our goal, however small, something magical happens.

Sure, we get something productive done (like learning the cost of publishing a book). You also paint a picture – a picture of the future you. The person who is on a mission.

Your coworker, who took up walking before work, seems to have a spring to their step at work.

You cross a long-overdue task off your list and notice it was a bit easier to get the next task done and the one after that.

You say “Good Morning!” to a stranger passing you on the street, they smile back and the world feels a bit friendlier.

In short: what you do changes what you believe.

It happens when I write the first paragraph of my blog, face my audience and smile as I step on stage, or grab my gym bag and get out of my car. Every step in the right direction immediately adds to my picture of how I want to show up.

There will always be someone ahead of us. They’re not there to intimidate us—they are there to inspire us. They remind us that better is always possible.

Our job is to invite the inspiration, that can become our aspiration and then take the first step.

Even if means we have to fake it until we make it.

Photo by Eddie Kopp on Unsplash

Want to read more about getting stuff done? Here a few of my favourites:

All entrepreneurs want to quit. (unless they’re lying)
The secret to getting sh*t done and 6 ways to get started
Five tactics that will help you quit stalling and get started on your next project