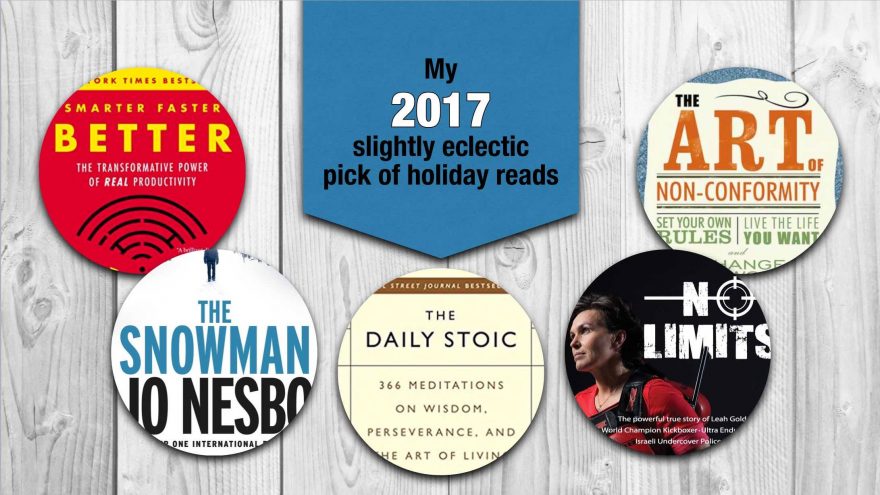 I always miss the summer— long, hot days in sandals, getting around on a bike and loads of time for backyard barbecues.

And time for reading.

The problem I have is that my list of books I want to read seems to be growing faster than I can cross them off. And that’s despite reading 2 books a month.

And then there are the great reads. The ones I want to underline, highlight and even read again.

I know that this short list of holiday reads (4 for learning, 1 for just fun) will entertain, stimulate and challenge you. They did for me.

Smarter, Faster, Better – the secrets of being productive in life and business by Charles Duhigg

Duhigg’s The Power of Habits was so influential on my thinking about routines and internal reward systems that I had to grab Smarter, Faster, Better – I wasn’t disappointed. As with “Habits”, Duhigg writes in such an entertaining style you might miss the gems if you aren’t hunting. The big one for me was this surprisingly simple, but incredibly important insight “Motivation is triggered by making choices that demonstrate to ourselves that we are in control.”

If you are curious about improving how you achieve goals, think about problems or even absorb information. Start here.

Daily Stoic – 366 Meditations on Wisdom, Perseverance, and the Art of Living, Ryan Holiday

I was afraid of this one. My assumption was that reading quotes from 3rd century Greek philosophers was sort of like swallowing cough syrup—you know it’s good for you but… I was wrong.

Holiday is a master storyteller and genius at unpacking a smorgasbord of complexity into spoonfuls of digestible bites. “The single most important practice in Stoic philosophy” he writes “is differentiating between what we can change and what we can’t.”

Organized into 365 daily quotes with matching modern-day interpretations, this a very readable injection of simple truths that cuts through the sometimes overwhelming complexity of our modern world.

Here’s my favourite: “Pretend that each event—whether desired or unexpected—was willed to happen, willed specifically for you.”

I’ve become a huge fan of the Norwegian multi-best selling detective novelist Jo Nesbo. After devouring The Son, Nemisis and Police I picked up a used copy of The Snowman (now released as a movie starring Michael Fassbender). Detective Harry Hole, reminiscent of Robert Galbraith’s (J.K. Rowling’s pseudonym) Cormoran Strike, is a complicated, dark character full of faults, but also the only person who can piece together clues from a gruesome crime. It is, as they say, a page turner.

One of my favourite quotes: “Good stories are never about a string of successes but about spectacular defeats,” Støp had said. “Even though Roald Amundsen won the race to the South Pole, it’s Robert Scott the world outside Norway remembers. None of Napoleon’s victories is remembered like the defeat at Waterloo. Serbia’s national pride is based on the battle against the Turks at Kosovo Polje in 1389, a battle the Serbs lost resoundingly. And look at Jesus! The symbol of the man who is claimed to have triumphed over death ought to be a man standing outside the tomb with his hands in the air. Instead, throughout time Christians have preferred the spectacular defeat: when he was hanging on the cross and close to giving up. Because it’s always the story of the defeat that moves us most.”

The Art of Non-Conformity: Set Your Own Rules, Live the Life You Want, and Change the World Chris Guillebeau

Years ago, I came across Guillebeau on some random podcast interview; read The $100 Startup and have been a fan ever since. Unlike Startup and his latest Side Hustle, The Art of Non-Conformity focusses on the personal development and mindset needed to carve out a life on your own terms. Biased heavily against the 9-5 traditional work path (Guillebeau’s worked for a humanitarian charity before turning to writing) Non-Conformity includes creating a legacy of work with a measured daily kind of discipline. I was surprised how this book challenged me to think about meaningful work and do good for our planet at the same time—I’ve got some work to do.

My favourite quote: “Unreasonable,” “unrealistic,” and “impractical” are all words used to marginalize a person or idea that fails to conform with conventionally expected standards.”

No Limits: an autobiography Leah Goldstein

If you think this is another look-at-me personal success story, you’re mistaken. Goldstein is much more than an uber-competitive warrior who excelled in four sports— she is a woman telling her remarkable and, at times unbelievable, story in her way. From innocent beginnings learning forms in Mr. Choi’s martial arts school, to blowing past competitors (male and female) in ultra-endurance road races, this is such an incredible story I had to remind myself it’s actually non-fiction and all about just one person. And did I mention her undercover work for the Tzahal, the Israeli Defense Forces?

Yes, her stories – both the wins and horrific crashes (“Victory is sweetest when you have scars on your knees.”), attacks and physical punishment – are jaw-dropping stuff. More importantly (and her book is aptly named), Goldstein is teaching us what is possible – not necessarily as an ultra-endurance athlete – but as someone who pushes the limits and, despite failures, keeps coming back.

Here’s a taste from No Limits of Goldstein’s incredible story: “The blades of the helicopter were deafening, but all I could hear was the screaming—me—screaming—as the medics rolled me onto a stretcher….The pain was incredible, and the screaming cycle continued all the way to the hospital. As the helicopter lifted off, I shut my eyes tight and wondered if death might just have been easier.”