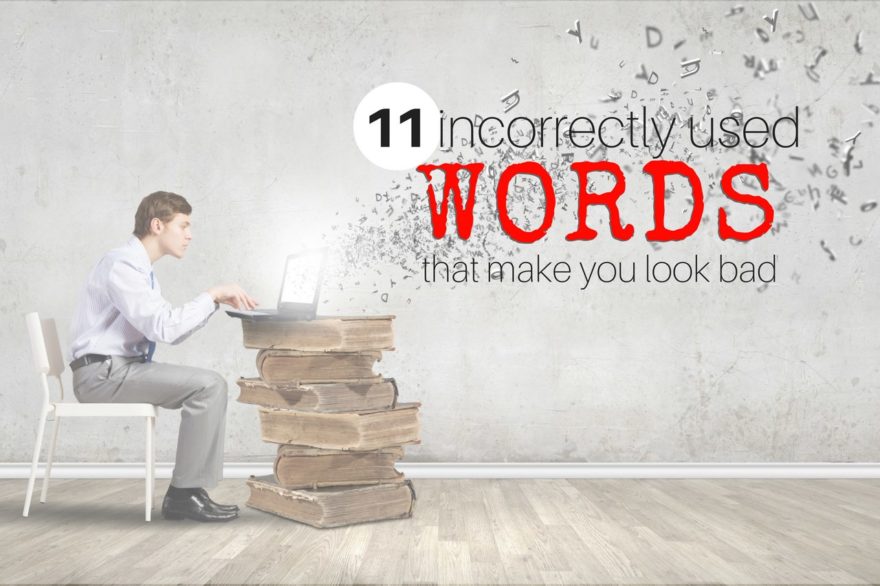 I’m not a word-nerd, really.

But, when I’m scrolling through your post or email, or book draft, or whatever and come across a word that doesn’t belong (or, for that matter, doesn’t exist) I come to a screeching stop—can’t help it.

So, I thought I would save you the embarrassment and share a list of 11 words commonly misused.

You can thank me by adding your own examples in the comments below.

1 – Everyday and every day

Years ago, my wife and I were driving a rented convertible VW in Baja, with our 6 year old daughter in the back, when I saw an airline’s billboard that, in part, read “veulos total dia” (flights all day).

Trying to sound smart, I started asking anyone serving us if they had what I wanted “total dia”. The comical looks I received told the whole story; what I should have asked was do they have it every day (“¿cada dia?”)     .

In English, we say everyday when we mean common or normal, as in “It became an everyday occurrence.”

Whereas, every day means today, tomorrow, the next day and so on, as in “It happens every day.”

If you adapt something you change it, to adopt is to take it as your own. So, after you read this list you can adopt the correct word use and adapt it for your blog.

3 – Already and all ready

Have you got that already?

Let’s set the record straight on this one: “irregardless” is not a word – the word you want is regardless. Regardless of what you’re working on or speaking about, that should make you sound smarter.

This is one of those examples you might need to say out loud to know which to use.

Usually, especially means particularly, as in “The speech was especially difficult to finish”.

Whereas specially usually means “in a special or careful manner” or “specifically”, like “She made a special effort for that client.”

That was an especially subtle distinction.

Use between when you’re distinguishing between a list of separate, distinct items, like: “The difference between a Frappuccino, latte and espresso is…”

Use among when you talking about things that are not distinct, like “There’s a big difference among bloggers.” You can also use among to indicate someone is part of a group, like: “She felt at home among the coffee drinking bloggers.”

Put simply, advise is a verb, advice is a noun. The quickest test is to say your sentence out loud. Like this one: “Nobody goes to a coach for advise.”

You write on stationery that is (hopefully) stationary. Get it?

Your high school principal might have taught you principles – you might even say that was principally her job.

My trick to remember the difference between principal and principle is the “pal” in principal refers to a person – so then principle must be the other meaning.

There’s lots of other meaning for principal, including the non-interest part of your loan and principal in a firm (as in high-level partner).

When you use then you’re talking about time, as in, “I finished my blog and then doubled checked it against Hugh’s list of 11 incorrectly used words.”

You use than to compare something, such as “After reading Hugh’s list I’m smarter than before.” (of course you are).

This is a tricky one.

First, impact should only be used when there is a physical action involved, like “I was impacted from behind.”